R. Scott Bakker on possible delays to his fantasy series

R. Scott Bakker has blogged about the ongoing lack of reviews or sales for Disciple of the Dog and about the impact of the economy on his status as an author. In particular, he states that whilst his books are selling and remain in print, he may need to take up a day job in the near future, which will reduce the amount of time he has to write. After some panicked comments, he put up a second blog post confirming that The Second Apocalypse series will be completed, but that after he finishes The Unholy Consult (the third book in the Aspect-Emperor sub-series) it will no longer be viable for him to remain a full-time author (presumably barring a massive jump in his book sales), so the timeframe for the remaining books will become much less certain. 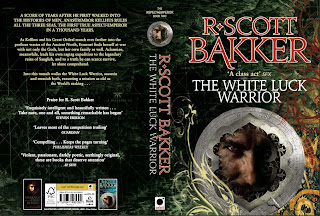 This is disconcerting news, especially after Bakker pledged to complete the entire series in another five years or so. However, this news presumably puts that possibility in doubt.

Another timely reminder that no author, despite their critical acclaim and even their sales success, is immune from the current harsh, economic climate.
Posted by Adam Whitehead at 16:28

Another timely reminder that no author, despite their critical acclaim and even their sales success, is immune from the current harsh, economic climate.

I thought it was more generally that Bakker's books don't sell that well, at least not in the US. They sell a modest amount, enough to make a profit for his publisher, but nothing fantastic. I don't know whether you can blame his lack of sales on the economic climate - they've always been limited.

As for Disciple of the Dog, that's really no surprise. He's not particularly well-known, and his previous attempt at writing a thriller was a dud. Even I haven't been able to bring myself to purchase and read it.

Agree, Bakker is definitely held back by his publishers being quite small and not well-known, and by his books not being available in paperback for a long, long time. He'd do better if Orbit were handling him (or at least his paperback sales; maybe they could cut a deal with Overlook?) in the US. Certainly in the UK he seems to be doing quite well.

Certainly in the UK he seems to be doing quite well.

Good to know. I'm buying the UK paperbacks and I'd hate for his publisher to pull a Price of Spring.

Bakker's UK publishers, Orbit, are also the guys who rescued Daniel Abraham after Tor dropped him. They're generally pretty good about finishing projects and series they begin.

The world is really going to shit when authors like Scott Bakker can't carve up a living by writing. This series might just be my utmost favorite, I do really hope he gets a major surge in sales.

Has the release date for the next book been announced.