Del Rey have unveiled their covers for the excellent first two books in Chris Wooding's Tales of the Ketty Jay series. 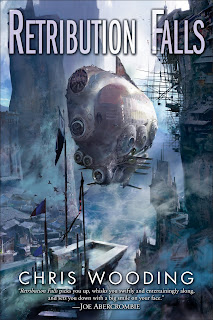 Retribution Falls is pretty much the same as the original, although they've moved the central airship around a bit, changed the font and removed the central figure. Still, impressive enough and Stephan Martiniere's artwork remains striking. The American edition is due on 26 April 2011. 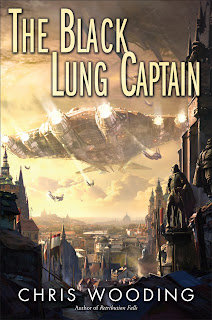 The Black Lung Captain's artwork is completely new, by Raphael Lacoste, and is pretty awe-inspiring (the more reserved British cover is below), with a very impressive shot of the titular warship filling the entire sky over a city. The American edition is due on 26 July 2011. 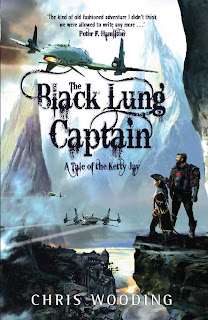 Overall, some good work there, despite the pretty boring typeface they've adopted. The third book in the Tales of the Ketty Jay series (which will now be at least four volumes), The Iron Jackal, should be published in the UK in autumn 2011.
Posted by Adam Whitehead at 12:28

I like the BLC's US cover. Makes me made I already received the UK one. Oh, well.

I'm a little uncertain about the Black Lung Captain American cover. The premise looks cool at some distance, but close up you notice it's photographs of various European cities in some kind of hasty collage. Look at the layer with that huge, dark church in front of that normal-sized Prague-esque street. The perspectives don't match up. Whereas the airship is painted in, with broad strokes.

I think I still prefer the UK cover for Black Lung Captain. It's great that these books are getting a US release. I've had a few friends over there complaining that they're not easy to get in the States.

One thing I've always wondered. Is the ship on the front of Retribution Falls the Ketty Jay?

Don't think so. That's quite a big ship with tons of guns. The Ketty Jay is small (think Serenity from FIREFLY size or even a bit smaller) and only has that topside autocannon as weaponry, IIRC.