The cyclops Gargarensis has vowed to shatter the gates to the Underworld and release the Titan Kronos back into the world. To this end he has assembled a vast army and set about this task in Greece. Arkantos, hero of Atlantis, sails to the Greek colonies to lend his aid in the Trojan War. Learning of Gargarensis and his plans, Arkantos forges a coalition with the Egyptians and Norse to stand against him.

Age of Mythology was released in 2002 as a stand-alone spin-off from the successful, mega-selling Age of Empires series. The first game in the series to use a fully 3D engine (albeit one cleverly modelled to resemble the 2D engine of the earlier games), it was a step forward in graphics and UI customisability at the time. Although the game was overshadowed somewhat by the close release of the superficially similar WarCraft III: Reign of Chaos, it was successful and ultimately sold over a million copies, an impressive feat for a real-time strategy at a time when the genre was starting to decline in popularity.

A few years ago the game was dusted down and re-issued as an "Extended Edition". This update touches up the graphics, has much better water effects and also allows for higher graphical resolution and widescreen modes. This version of the game includes the expansion, The Titans (which adds the Atlanteans as a fourth faction), and a five-mission side-campaign known as The Golden Gift, focusing on the dwarves (although they use Norse units and abilities). For a small additional fee, players can also download Tale of the Dragon, a nine-mission new campaign featuring a new, fifth faction, the Chinese. It's an impressive package, totalling 58 missions and taking approximately 40 hours to play through, which is a formidable amount of content for a real-time strategy game and excellent value, given the low cost that the game usually goes for in Steam sales.

The game is pretty standard as far as RTS titles go: you start with a base, in this case a town centre, from where you can train peasants who construct buildings and work as resource-gatherers. There are four primary resources: wood, gold, food and faith. The first three are used to build mundane structures and units (a mix of archers, cavalry, infantry and siege weapons) whilst faith is used to train "myth units" (sphinxes, dragons, cyclopses, hydras, frost giants etc) and one-off "heroes" (like Odysseus or Achilles). Resource-gathering is a surprisingly flexible system, with multiple ways of getting resources. For example, food can be hunted (peasants kill chickens, bears or pheasants and use them for food), farmed or gained from the sea by sending out fishing boats, whilst gold can either be mined directly, gained through trade at a marketplace or setting up a trade network between your town centres using caravans.

As usual, you amass armies which you can take into battle. The composition of these armies is interesting, with a rock-paper-scissors mechanic complicated by the deployment of counter-units (pikemen who are marginally effective in infantry battles but devastating against cavalry), so assembling a well-balanced force is essential. Units have a surprisingly high number of hit points, so making sure you get unit upgrades from an armoury to improve armour, attack and resilience to specific damage types, like bludgeoning or piercing is also important. As each game proceeds, you can upgrade to a different age, which unlocks new units and building types.

This is all standard, but Age of Mythology nails the details very well. This was one of the first RTS games that allowed you to automatically task newly-built units (so right click on a gold mine to make all the villagers built after this point automatically go over and start mining), resulting in a very smooth and intuitive playing experience. 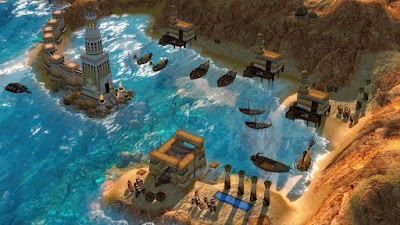 In terms of gameplay, Age of Mythology is hugely enjoyable, but it does focus a lot on attack. Whilst some games give you impressive options for defence and turtling, like StarCraft and its bunkers, photon cannons and siege tanks, Age of Mythology's defensive structures tend to be less effective, with walls and towers coming down very easily to enemy action (disappointingly, as the game's wall-building system may be one of the best in any RTS game ever made, allowing you to built elaborate fortifications very easily). The game is at its best when you are constantly engaging the enemy, reinforcing as needed and keeping them on the back foot. Tactically, a fine balance is needed between known when to keep up an attack and when to fall back for reinforcement.

In terms of story, the game has a very silly but enjoyable narrative which mixes up the Norse, Egyptian, Greek and Atlantean legends and stories in a manner that's contrived but fun. The story can't hope to match WarCraft III's beautiful cut scenes and in-game plot twists, but it does know when to butt out and not interfere with gameplay (a lesson other RTS games could learn from, even now) through endless cut scenes and major reversals you can't do anything about. Age of Mythology remains a pretty fair game in that sense.

On the negative side of things, the game is very easy to, well, game. Some missions can be completed in minutes if you know where the objective is and if it isn't heavily guarded and difficult to get to. The AI could be better, and it's not uncommon for the AI to be so intent on getting its soldiers from A to B that it it sometimes doesn't stop to fight if you engage them and start slaughtering them on the march. The one-shot-and-done god powers means that the god powers are also not very useful in the game, and half the time can be completely ignored. There's also the feeling that some of the differences between the five sides are fairly superficial (only the Norse, who use soldiers to build things rather than peasants and have mobile resource-gathering carts rather than static stores, feel quite distinctive in that sense). Still, for a game that's sixteen years old, Age of Mythology feels quite fresh and modern in most respects. Even the graphics hold up well, only really dating when the camera zooms down for the in-engine cut scenes that open and close most missions.

More disappointing is the quality of the new expansion, Tale of the Dragon. The Chinese faction is far more generic than the original ones and the storytelling is utterly awful (lots of dodgy Chinese accents and amateur voiceovers abound). There are numerous bugs and errors introduced in this expansion not present in the original game (including the ability for your naval units to occasionally just sail off the edge of the map and die) that make playing it a chore. It's a shame as the new maps are wonderfully well-designed and there's a couple of variants on the standard designs which feel fresh (a massive plain allowing you build your perfect city, and another map where you have no buildings, just two enormous armies to go at it).

Still, this fresh repackaging of the original game is very successful and brings back to life an excellent and underrated RTS game. Age of Mythology: Extended Edition (****½) is available now on Steam.
Posted by Adam Whitehead at 14:58