Billy Dee Williams is returning to the Star Wars franchise. He will be reprising the role of Lando Calrissian in Episode IX, which is currently in production for a December 2019 release. 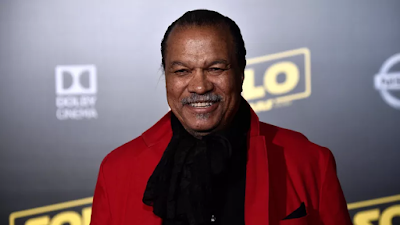 Williams played the role in the films The Empire Strikes Back (1980) and Return of the Jedi (1983), but has returned to the role in projects including The Lego Movie (2014) and episodes of Star Wars: Rebels (2015), as well as video games. Apparently both J.J. Abrams and Rian Johnson considered including him in The Force Awakens and The Last Jedi, but ultimately decided he didn't really have a role.

The sad passing of Carrie Fisher (who played Princess/General Leia) and the on-screen elimination of Harrison Ford (Han Solo) and Mark Hamill (Luke Skywalker) means that Williams will be the highest-profile returning member of the original cast in Episode IX, alongside Anthony Daniels (C3-PO) and Peter Mayhew (Chewbacca).

A younger version of Lando was played by Donald Glover in the recent Solo spin-off film.
Posted by Adam Whitehead at 21:57

Hey, spoilers! I haven't watched them yet, I'm waiting for the last one to be out.

Mike, I feel you -I'm highly allergic against spoilers- but dude, you shouldn't be reading articles about the third movie of a trilogy if you don't want to get anything of the first two spoiled...