Last month HBO confirmed it was moving ahead with a pilot script for a Game of Thrones spin-off show based on the Long Night, the ancient war between the First Men and the White Walkers that ended with the construction of the Wall and the founding of the Night's Watch. Jane Goldman has been developing the project (in consultation with George R.R. Martin) and HBO have been happy enough with her work to push it through to the pilot stage. We're now hearing that the pilot will shoot in October and November - nine years exactly after the pilot shoot for Game of Thrones itself - with a view to the first season shooting next year and airing in 2020, mirroring the GoT development process. 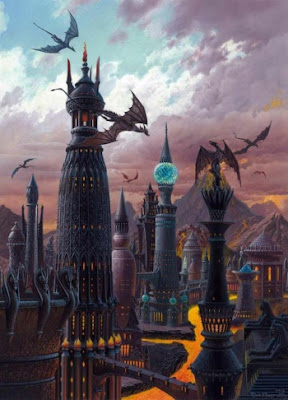 Ted Nasmith's depiction of Valyria, from The World of Ice and Fire.

There are also now rumours spreading that HBO is leaning towards greenlighting a second pilot, this time set around the Doom of Valyria. This is the project that Max Borenstein (Godzilla, Skull Island) has been working on for some time and has the working title Empire of Ash. According to the reports, HBO and Borenstein - presumably also in close consultation with George R.R. Martin - have developed a significant amount of worldbuilding for this project, with a five-season, 10-episodes-per-season story arc worked out in some detail which presumably culminates in the Doom and its aftermath.

According to the report, the story will be predominantly set in Valyria and its colonies in Sothoryos, and will feature a much more diverse cast of characters in terms of religion and ethnicity. The story will follow several characters with House Targaryen very much a minor background faction, but which will presumably become higher in profile later on. According to the reports Aenar Targaryen and his daughter Daenys the Dreamer will play a role, which suggests this will be multi-generational story, spanning the century between Aenar's departure for Dragonstone and the Doom itself. In this manner the show sounds highly reminiscent of HBO's epic series Rome (2004-07), except set in a fictional setting. 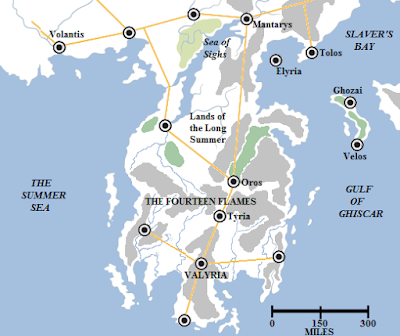 Is this story plausible? Yes, of the five spin-off ideas HBO originally commissioned, I understand that three are still in serious play, including both a Long Night and Doom of Valyria series. The third, which may be the Dance of Dragons, may actually be dependent on how far they go down the Doom of Valyria route, as both would be dragon-heavy story with political intrigue; Empire of Ash may be more tempting as it's a whole new story whilst the Dance's storyline will be presented in full in Fire and Blood, so I suspect the Dance project would move onto the backburner if Empire moves forward (in fact, the suggestion that HBO are actually considering two projects indicates this may have already happened).

The reasons why Empire of Ash has not been formally greenlit yet appear to be myriad: HBO want some more space from The Long Night's announcement before confirming this project and they have also been courting Miguel Sapochnik to direct the pilot. However, Sapochnik has also reportedly been approached by Netflix to direct possibly multiple episodes of the first season of The Witcher, which is now in formal pre-production and casting, with a view to shooting at the end of this year or the start of next, potentially clashing with the Empire of Ash pilot.

Interesting to get more news on this as it develops.
Posted by Adam Whitehead at 21:06

The main issue with all these potential series is that there is no extensive written material to adapt from and as Game of Thrones demonstrated its writing quality deteriorated when it departed from the books.