The Spirit Thief by Rachel Aaron

Eli Monpress is a trickster, a thief and a manipulator of spirits. His latest caper involves kidnapping the King of Mellinor, but the kingdom holds a dark and ancient secret that triggers an intervention by the powerful Spirit Court, the arbitrators of the use of spirits and sorcery. Monpress may be in over his head, but he has resources to call upon that no-one suspects. 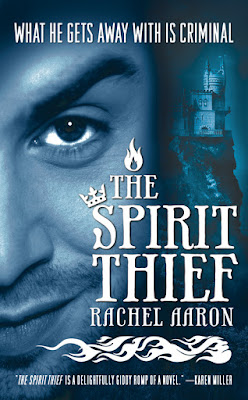 The Spirit Thief is the first novel in the five-volume Eli Monpress fantasy series by Rachel Aaron, and was her debut novel. The book is standard fantasy caper fare, a little bit Ocean's Eleven by way of Dungeons and Dragons, with a group of mismatched protagonists forced to work together to pull off a challenging mission.

In the right hands - say Scott Lynch with his excellent Lies of Locke Lamora or Joe Abercrombie with a considerably bloodier take on the idea in Best Served Cold - this can make for a gripping and compelling novel. The Spirit Thief doesn't really come close to that kind of quality, but Aaron makes up for the relative lack of depth by making a book that's short, fun and even kind of airy. There's not much in the way of grimdark here (a few cynical musings on power aside), with Aaron instead clearly having fun writing the book and creating a breezy palate-cleanser of a fantasy novel.

There are some interesting ideas, most notably the magic system which revolves around the manipulation of spirits. Every organic object in the world has its own spirit and sorcerers can "talk" to those spirits to bring about events they want: getting a wood spirit to lose cohesion so a door frame collapses and the door can just be pushed over, for example. Monpress's skill is in negotiation: rather than commanding or cajoling spirits, he makes friends with them and can thus extract a much greater level of service than other wizards. Exactly why Monpress has this level of spiritual empathy is unclear, but will presumably be explored in later books.

The magic system is interesting and the central characters are interesting, but so far pretty archetypal: Spirit Court investigator Miranda is by-the-book and overconfident, Eli is a rogue and charmer but with notable secrets, Josef is an honourable warrior whose ideology gets in the way of practicality and Nico is an apparently young girl but with weird superpowers. There's also a talking wolf and a couple of sentient swords, because why not? If you're going to write a fantasy novel you might as well go all-out.

This sometimes leaves The Spirit Thief feeling derivative of other works and it struggles to maintain its own sense of identity. This isn't helped by extremely limited worldbuilding (the nation of Mellinor is so bland it's barely even described, which is a problem when the geological history of the kingdom suddenly becomes important in the finale) and the prose, which can tend towards the bland. Dialogue is a bit better and there are some interesting tics in characterisation which are promising for future books. But overall the book is fun and easy to read.

The Spirit Thief (***½) will win no prizes for originality or the quality of its writing, but it's also a refreshingly straightforward and even more refreshingly short and concise fantasy adventure with some hints that the series may get more interesting in the sequels. The novel is available now in the omnibus The Legend of Eli Monpress (UK, USA).
Posted by Adam Whitehead at 10:22

Well, you liked it more than me, but I broadly agree on the pros and cons; glad to see someone else admit to not adoring it!