GAME OF THRONES: THE LONG NIGHT pilot moving forwards, all other spin-off series on hold

HBO has confirmed it is moving forwards with the Game of Thrones spin-off pilot they've ordered from writer-producer Jane Goldman. With the rough working title The Long Night, the news series will be many thousands of years before the events of Game of Thrones and will depict the events that led to the founding of House Stark, the Night's Watch and the Wall, including the original rise and invasion of the White Walkers. 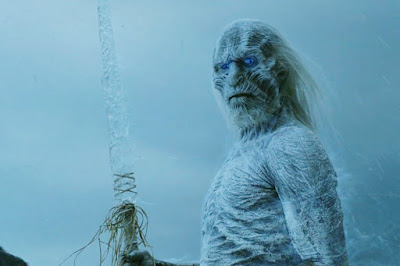 The spin-off pilot was expected to shoot in November so HBO execs could assess it in the spring and decide to move forwards; if they do, the first season would shoot later in the year for a spring 2020 debut. However, it now sounds like the pilot might shoot in the spring instead, which could change that timetable significantly.

All of the other spin-off series are currently and officially on hold. A fortnight ago rumours broke that HBO were also considering a second spin-off show, set in the old Valyrian Freehold about a century before the Doom, although HBO have not officially confirmed or denied such a project is in development. If it is, it sounds like HBO have put it on the backburner for now.

HBO also confirmed in the same announcement that Game of Thrones itself will return for its final season in the first half of 2019.
Posted by Adam Whitehead at 18:09