Steve Ditko, best-known as an artist and writer for Marvel Comics in the 1960s, has passed away at the age of 90. 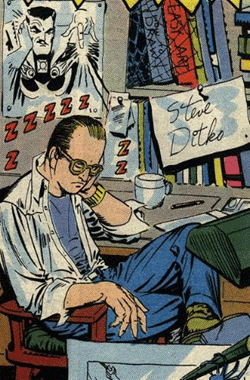 Born in 1927 in Pennsylvania, Ditko developed a strong interest in art from a young age. He studied art under Batman artist (and Joker creator) Jerry Robinson, who was one of his idols. It was Robinson who introduced Ditko to Stan Lee, then working as an editor at Atlas Comics (the forerunners to Marvel). Ditko began his publishing career in Daring Love in 1953, followed up by Fantastic Fears the year after. Ditko began working for renowned writer-illustrators Joe Simon and Jack Kirby (the creators of Captain America), working on many of their titles in the mid-1950s. He then moved to Charlton Comics, where he co-created the character of Captain Atom (who later inspired the Watchmen charactr Dr. Manhattan) in 1960.

At the same time, Ditko began an association with Atlas Comics in 1956, particularly on Amazing Adventures where he directly collaborated with Stan Lee on numerous one-shot mystery and horror strips. In 1962, the final issue of Amazing Adventures (now retitled Amazing Fantasy) introduced a new character co-created by Ditko and Lee: Spider-Man.

Lee had originally planned to create Spider-Man with his regular collaborator (and Ditko inspiration), Jack Kirby. However, Kirby wasn't too keen on the idea and his designs proved unusable. Lee turned to Ditko, who very quickly created the character's signature look, including the gimmick of the secret identity. Eric Stanton, who shared a studio with Ditko, offered advice such as having the webs shoot out of Spider-Man's hands directly (rather than using a "web gun" as Lee had planned), but otherwise the character design was wholly Ditko's work.


The character took off and his own title, The Amazing Spider-Man, quickly launched. As well as Spider-Man himself, Lee and Ditko co-created many of his signature villains: the Green Goblin, Doctor Octopus and the Lizard. Their collaboration also resulted in the creation of another character, Doctor Strange, who debuted in Strange Tales #110 (1963) before getting his own title.

In 1966 Ditko chose to leave Marvel Comics. He and Lee had not been getting along for a while and their collaborations had been handled by intermediaries. Even Lee was uncertain exactly why they had fallen out, although their politics and ideologies were on very different wavelengths. Ditko was a hardline Objectivist and wanted to create characters more in line with his believes. In 1967 he created the entirely creator-owned character Mr. A, whose adventures he would continue to intermittently relate. Mr. A divides the world into black and white, good and evil, and is uncompromising in his pursuit and punishment of evil. Writer Alan Moore found the character quite ridiculous, later penning silly songs about him and, in the ultimate tribute, created the Watchmen character of Rorschach as a satirical dig at the character.

Ditko spent several spells at DC Comics and continued his work on the Charlton characters up until the line folded in 1986. He also returned to Marvel in 1979, working on Machine Man and Micronauts. He continued to work as an artist-for-hire, but his latter work is largely undistinguished.

In 2007, comics fans and broadcaster Jonathan Ross presented a documentary on Ditko's career (see above), eliciting comments from Stan Lee, Alan Moore and Neil Gaiman. An intensely private man, Ditko refused to appear on camera but did agree to an off-screen conversation with Ross and Gaiman.

Ditko helped create one of the most iconic fictional characters of all time, and his other contributions to the field of comics remain notable and impressive. He will be missed.
Posted by Adam Whitehead at 11:24

A nice tribute post.From his later period works I think it is worth mentioning Rom:Spaceknight, a Marvel licensed comic, and his collaboration with other great artists there who inked his pencils,such as John Byrne and P.Graig Russell.