Obsidian announce their new RPG, THE OUTER WORLDS, from the creators of FALLOUT

Obsidian Entertainment have formally announced their next game, The Outer Worlds. As anticipated from teasers earlier this week, this is a retrofuturistic SF roleplaying game. The setting is the planet Halcyon, one of numerous colony worlds overrun by corporations. The player creates a character who wakes up from a long period in cryosleep and is asked to help recover missing colonists from across the planet. The trailer hints that you may also travel to other planets and engage in space combat.

The game is the brainchild of acclaimed RPG designers Tim Cain and Leonard Boyarsky. The two developers are best-known for creating the Fallout franchise for Black Isle Studios and Interplay, jointly creating the first game in the series in 1997 and working on the sequel of a year later. They later left the floundering Interplay to found the highly-esteemed development studio Troika, where they worked on Arcanum: Of Steamworks and Magick Obscura (2001) and Vampire: The Masquerade – Bloodlines (2004), two of the most highly-acclaimed CRPGs of all time. After Troika was disbanded, Cain joined Obsidian Entertainment (the successor to Black Isle) where he worked on games such as Pillars of Eternity (2015). In the meantime Boyarsky joined Blizzard and worked as a writer and “loremaster” on Diablo III (2012) and its expansion Reaper of Souls (2014). 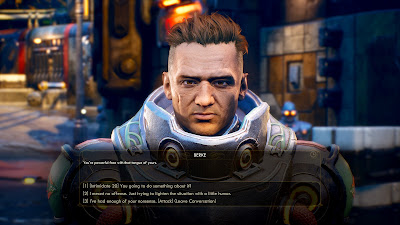 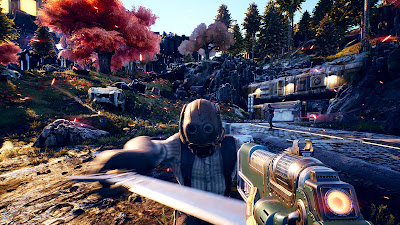 In 2015 Boyarsky joined Cain at Obsidian and the two were given the freedom to work on a new game, one they’d been discussing informally for over a decade by that point. Obsidian had created a new niche making retro-2D isometric RPGs like Pillars of Eternity, Tyranny (2016) and Pillars of Eternity II: Deadfire (2018) but they didn’t want to get locked into that permanently and wanted to make a colourful 3D RPG with high production values that could go head to head with the likes of BioWare and Bethesda. 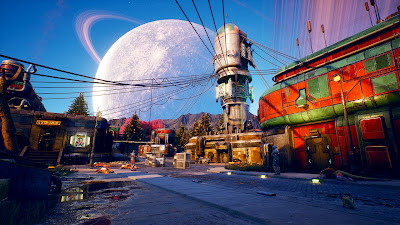 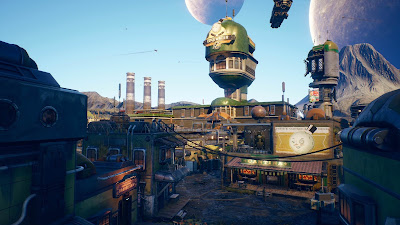 The Outer Worlds is the result of that collaboration. As with Cain and Boyarsky’s previous games, it is set in an unusual, colourful and characterful world which reacts and changes to the player’s actions. Players have freedom to solve problems with violence, wits, stealth or negotiation, and have a lot of freedom over their builds. Skills play a much larger role in dialogue choices than in many RPGs (which sometimes have oddities where characters with very high science or medicine skills are unable to use those skills to solve problems, instead having to go on lengthy quests to recover information). They can also amass a crew of various characters who can provide assistance and support. 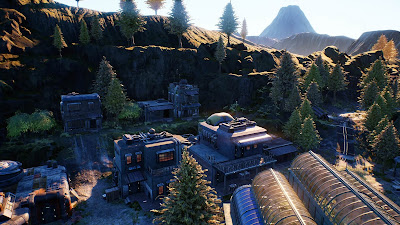 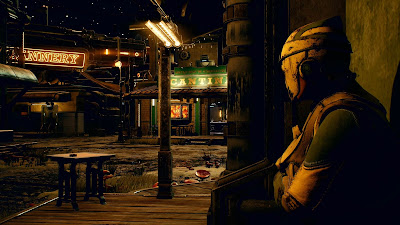 The game is played from a first-person perspective and looks on first glimpse like a cross between New Vegas, Borderlands and Mass Effect. The trailer demonstrates combat, dialogue and roleplaying possibilities. It is unclear at the moment if the game is a huge open world (like a Bethesda title) or more of a focused game set in large but linear environments (like BioWare's Mass Effect series).

The Outer Worlds will be published by Private Division, the new indie publishing division of Take Two Interactive. Obsidian were recently purchased by Microsoft, but this will not impact on The Outer Worlds which will be released on PC, X-Box One and PlayStation 4 in 2019.
Posted by Adam Whitehead at 13:59

This is the first video game I've been excited about in a long, long time.

Isn't anyone going to post about how it will suck because it's using a first person camera perspective? [?!?!, that really baffled me on the CP 2077 post]

This looks awesome. This is the first I've read of it, thanks for putting it on my radar.