Back in 1998, it would have appeared that the venerable Western computer roleplaying game was in a precarious position. The genre had been dealt the hammerblows of a series of a disappointing releases (including in formerly well-regarded franchises like Might & Magic), the rise to prominence of real-time strategy and first-person shooters and an explosion in the popularity of the Japanese RPG, spearheaded by the all-conquering Final Fantasy VII. The genre needed a saviour and it would arise in...Canada? 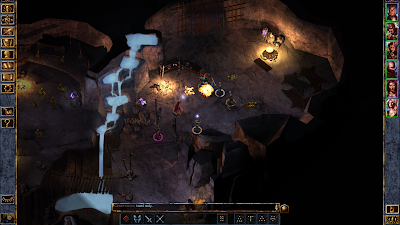 Founded in Edmonton, Canada in 1995, BioWare was a rather odd video game development company. It had been established by Ray Muzyka, Greg Zeschuk and Augustine Yip, recently-graduated medical doctors who realised they had much more fun playing and creating games than in practising medicine. Operating out of Zeschuk's basement, they had made a mech combat game called Shattered Steel in 1996 that had done quite well for their publishers, Interplay, and were now looking for a new project.

BioWare had developed an engine for a project called Battleground: Infinity in which creatures from different mythologies could be battled by powerful heroes. Although Shattered Steel had been a 3D game, they decided this new project required a more classic, old-skool look and reverted to sprites, with painted backgrounds digitally scanned into the game with a movement grid overlaid on top, an extremely fast way of producing game areas, although a somewhat storage-intensive one in an age when PC hard disks were still averaging out at around 4 GB in size. The engine was also unusual in that it combined statistic and customisation elements taken from role-playing games, but fused to a real-time strategy control scheme (including drawing boxes round heroes to select them and hotkeys to use their abilities). The genius moment was the ability to hit the space bar to pause the game, issue commands, and then have the action resume and the results play out. BioWare were proud of the engine and its unusual blending of new and old tech, and called it the Infinity Engine.

The BioWare team took the prototype into Interplay, who had published their first game, and got talking to the RPG division headed by Feargus Urquhart. The Interplay internal RPG division had had a bit of a rough time, as their last several games (including the Forgotten Realms-set game Descent to Undermountain) had bombed and they had little promising in development except a post-apocalyptic RPG being developed by Tim Cain and Leonard Boyarsky, which the team believed passionately in but senior management seemed sceptical about.

Urquhart liked the pitch, but not the setting. When the game's designers, including Trent Oster and Scott Greig, said for the umpteenth time it was "a bit like Dungeons and Dragons", Urquhart pointed out that Interplay held the gaming licence for D&D and all its myriad game worlds. Why not just make a Dungeons and Dragons game? BioWare were taken aback, but then enthusiastic. D&D had arguably not produced a classic game in the computer space since Eye of the Beholder II in 1992, and before that the classic "Gold Box" series of games. It was also a bit of a risk. Dungeons and Dragons was at the lowest ebb of its popularity in its history, with its parent company TSR in real danger of going bust. But Interplay loved the technology, BioWare loved the idea and they went for it.

The resulting game was to be called Baldur's Gate, named after an interesting but distinctly second-tier city in the Forgotten Realms setting (with cities like Waterdeep, Silverymoon, Calimport and Zhentil Keep being better known in the setting and the related fiction). There was relatively limited contact with TSR - whose financial woes at the time were considerable - so the teams at BioWare and Interplay delved deep into Forgotten Realms novels and pen-and-paper materials to assemble an impressive amount of lore with a high degree of fidelity to the setting.

There were worries about the project: Final Fantasy VII was released on the PlayStation several months into the development of Baldur's Gate and its elaborate cut-scenes, 3D graphics, gripping storyline and memorable characters was a huge hit (despite an iffy translation), selling millions upon millions of copies. It was a huge crossover success and brought Japanese RPGs into the mainstream. Would Baldur's Gate look tired and old-fashioned in comparison?

The developers did not believe so, and in fact they followed some of the conventions laid down by JRPGs in making the game. The biggest difference between WRPGs and JRPGs is based in character. In Western RPGs it is traditional for the player to create the entire party themselves, rolling their stats, naming them and deciding their course of action, with usually a fair degree of freedom available at any one time. JRPGs were much more focused and pre-planned, with players given control of a pre-created party of characters (although with the freedom to customise their stats and equipment as they increased in power through the game) and made to follow a much tighter storyline. Baldur's Gate squared the circle by giving the player the ability to craft a central character of any race, gender or class, but their companions would be pre-generated and the player would be able to choose up to five of them (from a pool of around a dozen) to join them at any one time. Companion characters would have moral codes and would object to the player's actions: evil actions might cause a paladin to leave the party or even attack the other characters. The interrelationships between the companion characters were fascinating, with some falling in love and marrying, or forcing the player to carry out a dangerous quest on their behalf.

During development there were already signs of a renaissance in Western RPGs: The Elder Scrolls II: Daggerfall had been a modest success in 1996, combining enormous player freedom with a first-person viewpoint. Diablo, also released in 1996, had been a fast-paced action RPG focused on dungeon delving and frantic combat. Interplay's own Fallout, the Cain/Boyarsky project, had been a modest and well-reviewed success in 1997 and the company had followed up quickly with Fallout 2 in 1998. During development of that game, Interplay's internal CRPG division had renamed itself Black Isle, and provided assistance in developing Baldur's Gate as well. 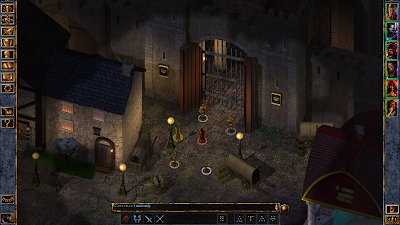 Baldur's Gate was released to tremendous success on 21 December 1998. Reviews were ecstatic, the game's writing and character roster was highly praised and its translation of the D&D rules was appreciated for both its fidelity to the pen-and-paper game and its approachability for newcomers. Baldur's Gate was also part of the renaissance of D&D itself: in 1997 the ailing brand had been saved by Wizards of the Coast (creators of Magic: The Gathering) who were now releasing new material for the game and preparing for a new edition, to be released in 2000. Baldur's Gate formed part of the D&D comeback, showing that the game could be as fun and as cool - and far more customisable - than any high-budget, console-focused JRPG.

Baldur's Gate provided a vivid and rich fantasy experience, drawing on almost a dozen years in print of Forgotten Realms products and twenty-four years' worth of Dungeons and Dragons rules and materials. It's locations, characters and stories became iconic almost overnight, such as the struggles of the villain Sarevok, the perilous descent into the Mines of Nashkel and rise of the Rashemi hero Minsc and his miniature giant space hamster ally, Boo (who may constitute one of video gaming's earliest memes). The game was customisable, with a difficulty level that could be adjusted on the fly and on-line guides providing help and advice on how to develop your character. The story experience could be very different depending on which characters were recruited into the party and which options were chosen. The Infinity Engine's gorgeous painted backdrops and minimalist interfaces (where complex dice-rolling mechanics could be hidden away) were also highly impressive and almost immune to being dated: in 2018, the Baldur's Gate games have aged far better than the big-budget 3D extravaganzas which they had competed again.

Baldur's Gate also led to an explosion of CRPGs. Even before development had been completed, Interplay's internal CRPG team, Black Isle, had licenced the engine to make their own games: Planescape: Torment (1999), a moody, story-driven CRPG is often cited to this day as the greatest RPG of all time. Icewind Dale (2000) and Icewind Dale II (2002) were excellent, combat-focused dungeon dives.

BioWare themselves developed an expansion, Tales of the Sword Coast (1999) and then a full sequel, Baldur's Gate II: Shadows of Amn (2000). Baldur's Gate II was far bigger than the original with a much more complex, far more gripping plot. It also had, in Jon Irenicus, arguably the best-written and best-acted (by the brilliant David Warner) video game villain of all time. It was The Lord of the Rings to Baldur's Gate's The Hobbit, and is also often cited (alongside Planescape: Torment and, more latterly, The Witcher 3) as the greatest CRPG of all time.

After the release of Baldur's Gate II's expansion, Throne of Bhaal (2001), BioWare created a new 3D engine, Aurora, which they used to create Neverwinter Nights (2002) for Atari and, in a heavily-modified form, Star Wars: Knights of the Old Republic (2003) for LucasArts. BioWare chose to leave behind licensed properties to make original worlds, resulting in Jade Empire (2005), Mass Effect (2007) and their "spiritual successor" to Baldur's Gate, Dragon Age: Origins (2009). BioWare's games became more graphically stunning, more streamlined and ever more accessible, but some feared this was at the cost of character and depth. Dragon Age: Inquisition (2014) and Mass Effect: Andromeda (2017) were both heavily criticised for being dumbed-down action games lacking the richness of their previous titles. Of course, BioWare are really no longer BioWare: bought out by Electronic Arts in 2007, their founders and most of their original team had left the company by the mid-2010s.

Other companies have also paid tribute to the game. Obsidian Entertainment, which arose from the ashes of Black Isle after Interplay's collapse in 2003, have developed a series of RPGs inspired by the Infinity Engine: Pillars of Eternity (2015), Tyranny (2016) and Pillars of Eternity II: Deadfire (2018). inXile Entertainment, created by some of the same team at Interplay, have created RPGs such as Wasteland 2 (2014) and Torment: Tides of Numenera (2017). Larian Studios created Divinity: Original Sin (2014) and Divinity: Original Sin II (2017) which both fused the spirit of Baldur's Gate and Ultima with co-op gaming.

However, it may be the most significant offshoot of BioWare's creation of Baldur's Gate came in the founding of a Polish company called CD Projekt Red. CDPR was founded to bring official translations of English-language games to the Polish market, which was dominated by unofficial pirate copies. One of the first games they translated was Baldur's Gate, and it was a huge success. Years later, CDPR decided to make their own RPGs and licensed the Aurora Engine from BioWare to make The Witcher (2007). A huge hit, the game spawned two sequels, the second of which, The Witcher 3: Wild Hunt (2015) is widely regarded as the greatest CRPG (and may be the best game, full stop) released this century. According to rumour, EA have asked BioWare to ensure that any future Dragon Age IV takes note of The Witcher 3's deep, reactive storyline and its memorable characters. Thus the apprentice has become the master.

Baldur's Gate changed the course of gaming history when it was released 20 years ago and is still a fine and engaging game to play today. You can find it now on Steam and GoG.
Posted by Adam Whitehead at 16:56

(People who've played the game will get that reference. :)