Forge of Darkness by Steven Erikson

It is more than a quarter of a million years before the time of the Malazan Empire. In this ancient age, the Tiste race is divided between noble families and bickering militias, trying to find their place in the world following the devastating wars against the Forulkan and the Jheleck. When the Tiste ruler, Mother Dark, takes the obscure Draconus as lover and consort, the noble houses are incensed and the seeds are sowed for civil war and religious conflict. 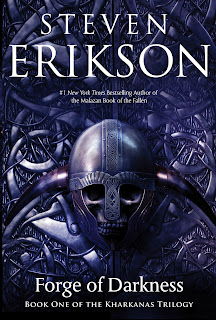 Forge of Darkness is the first novel in The Kharkanas Trilogy, a prequel series to Steven Erikson's Malazan Book of the Fallen. This trilogy will chart the splintering of the Tiste race into the three sub-races seen in the main series book (the Andii, the Liosan and the Edur) and explain much of the ancient backstory to the series. Some characters from the main series - such as Anomander Rake, Silchas Ruin, Hood and Gothos - appear here as much younger, far less experienced figures. However, those hoping for I, Anomander Rake will likely feel disappointed. Rake is a central character in the events unfolding and appears a few times, but much of the action takes place around new, much less important characters. Also, while the story is set more than 300,000 years before Gardens of the Moon, this isn't the alpha-point of the entire Malazan universe. Tiste society is many thousands of years old when the story opens and Rake, Mother Dark, Ruin and Draconus are already important characters with significant histories in place.

Instead, the trilogy is much more concerned with clarification of events in the main series books and explaining why certain things are the way they are. Surprisingly, the series addresses questions that I think most fans thought would simply be left as, "That's how it is," such as the nature of the gods in the Malazan world (and the apparent realisation by Erikson that 'gods' was not the right word to use for them), why the different Tiste races have different appearances and why the Jaghut evolved the way they did. Some long-burning questions are indeed addressed, such as the reasons for and the nature of Hood's war on death, but for the most part Erikson is not really concerned with really addressing obvious mysteries (those left wondering what the hell the Azath Houses are will likely not be satisfied by this book, in which even the race they are named after is baffled by them).

Instead, the narrative unfolds on its own terms. As usual, Erikson has a large cast of POV characters including nobles, soldiers, priests and mages, many of them with slightly cumbersome names. However, Erikson strives to differentiate his characters more from one another then in previous novels. Forge of Darkness enjoys a shorter page-length than most of his prior books (clocking in at a third less the size of most of the Malazan novels) and is far more focused. The plot is a slow-burner, divided into several relatively straightforward narratives. This is Erikson at his most approachable, easing the reader into the situation and story rather than dropping them in the middle of chaos and expecting them to get on with it (such as in the first novel in the main series, Gardens of the Moon).

Of course, Erikson isn't going to give the reader an easy ride. Minor peasants continue to agonisingly philosophise over the nature of existence with surprisingly developed vocabularies at the drop of a hat. There are too many moments when characters look knowingly at one another and speak around subjects so as not to spoil major revelations for the reader, regardless of how plausible this is. There is an awful lot of hand-wringing rather than getting on with business. But there's also a few shocking reversals, some tragic moments of genuine emotional power and some revelations that will have long-standing Malazan fans stroking their chins and going, "Ah-ha!"

Forge of Darkness (****) is Erikson's attempt to channel the in-depth thematic approach of Toll the Hounds but weld it to a more dynamic (by his terms) plot-driven narrative whilst also satisfying the fans' thirst for more information and revelations about his world and characters. It's a juggling act he pulls off with impressive skill, with some polished prose and haunting moments. But those who continue to find his reliance on philosophical asides and long-winded conversations tiresome will likely not be convinced by this book. The novel is available now in the UK and USA.
Posted by Adam Whitehead at 18:44

Email ThisBlogThis!Share to TwitterShare to FacebookShare to Pinterest
Labels: forge of darkness, kharkanas trilogy, steven erikson, the malazan book of the fallen

Knowing that you've read all (or most of) the books in this series, which book would you consider a good enough starting point.

and if I'm not mistaken, aren't esslemont's first two books supposed to be set almost right before the events of erikson's first novel.

I'm 2/3 in and choosing to put it down.. as much as i adored most of the 10 Malazan tales... this one is to philosophically self-agrandizing, and to ugly, for my taste. I miss Karsa, I miss the Bridgeburners.