1876, the Black Hills of Dakota Territory. The discovery of gold has inspired thousands of people to break a treaty with the natives and flock to the area to prospect. The camp of Deadwood has been established to cater for their needs and is rapidly expanding into a large town. In such circumstances there lies opportunity, and the criminally-minded Al Swearengen, wanted for murder in Chicago, has set up his own saloon to cash in on such opportunities. 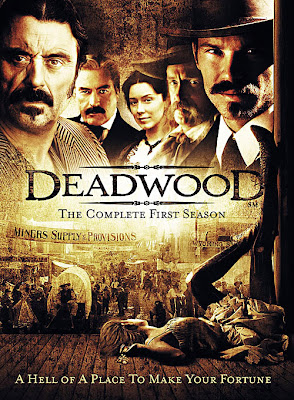 Swearengen's operations are complicated by the arrival of the noted Wild West figures Calamity Jane, Wild Bill Hickok and Charlie Utter, as well as the establishment of a rival hotel and casino across the road from his own joint and the arrival of a former Montana marshal, Seth Bullock, who is looking to open a hardware store. With native attacks still a threat and a cholera outbreak striking the town, Deadwood needs to negotiate some perilous waters if it is to survive.

Deadwood is widely considered to be one of the jewels in HBO's crown. Running for three seasons from 2004 to 2006, the series has attracted critical acclaim matched by perhaps only two other shows in TV history: The Sopranos and The Wire. Unlike those shows, Deadwood was not able to complete its planned storylines and ended prematurely in 2006 for reasons that are still disputed between the show's creator and the studio.

The first season establishes the basic premise of Deadwood: the depiction of the slow metamorphosis of the settlement from a mining camp to a proper Western town. In the first episode, the town is shown to be lawless and almost anarchic. Over the course of the season the institutions of law, order and governance come into being, with in some cases the corrupt figures of the early episodes becoming 'respectable' figures in the new order. This shift is marked by one particular murder, which has significant ramifications for the town and its future. This gives the first season its thematic structure, the arising of order out of chaos.

The writing is exemplary, with David Milch and his writers (although Milch effectively rewrote every script in the season himself) creating a cadence rooted in both historical accuracy and also in getting across the feel of the period. The high levels of modern swearing, for example, are not particularly accurate but Milch felt this was necessary as the contemporary curse words would not resonate with a modern audience. This also extends to the general accuracy of events. Many of the show's characters are real historical figures, with their activities being a mixture of historically real events, real events that have been condensed or moved around in time for dramatic effect, and totally new scenes that better illuminate the characters and themes of the series. If there is a problem in the writing it's the lack of consistency in the use of some devices: E.B. Farnum's tendency to slip into monologue is rather intermittent, for example. Otherwise it's rich, textured and often amusing.

Performance-wise, the show features excellent turns from the likes of Timothy Olyphant (as Seth Bullock), Keith Carradine (Hickok), Paula Malcomson (Trixie), Doc Cochran (Brad Dourif) and Molly Parker (Alma Garret), but it revolves around Ian McShane in the role of Swearengen. Swearengen sits at the heart of the series, affecting events around him, like a particularly profane spider in his web. McShane, previously best known as the title role in the easy-goin' British detective series Lovejoy, is a revelation in this role, bringing phenomenal presence and menace to the screen. The characterisation of all of the characters is particularly accomplished, with a real focus on making them real, conflicted people. For example, a bald surface reading of the show would cast Olyphant's Seth Bullock as the hero, standing up to the villainous Swearengen, but in fact the two characters are also shown in the opposing role as well, such as when Bullock loses his temper and almost beats someone to death in a disproportionate response to a threat, whilst Swearengen shows mercy - albeit of a rough kind - and kindness to a desperately ill member of the community. This layering extends to all of the characters, making them much more compelling.

Production values are impressive, with huge sets depicting the town and its interiors. It isn't an action-packed series, with considerably more talking than shooting, but when things do go off, they go off in style.

Flaws are almost non-existent. Some events feel somewhat random, but this may be down to the show being as interested in depicting moments showing day-to-day life in Deadwood as it is in ongoing story arcs. In fact, arguably the most successful episode of the first season is the tenth, which shows a typical 'day in the life' of the town aside from all of the other ongoing shenanigans.

The first season of Deadwood (*****) lives up to the show's reputation and billing as a gripping, entertaining and highly compelling drama series showing the realities of life in the West. The series is available now in the UK (DVD only, so far) and USA (DVD, Blu-Ray).
Posted by Adam Whitehead at 16:35

(The Walking Dead season 2 was by far, the WORST character drama I have ever seen through and through. Excellent action/horror, I do admit, sorta ironic, that.

Anonymous, it probably has something to do with how Deadwood is so well made that you'd have to be mind-bogglingly thick not to recognize that.

On another note, I was surprised to learn partway through watching this season that most of the main characters were actually real historical figures. They almost seem too perfectly crafted to have actually existed.

Ok, I'm now convinced to give Deadwood a try. After Carnivale incident, I swore never to watch anything HBO prematurely cancelled. (You should do Carnivale reviews one day Adam!)

About Walking Dead S2, I'm still not sure why I didn't like it. Was it because it was really bad, or because I was pissed they couldn't keep F. Darabont?

I'm still a little disappointed that McShane isn't playing Mance Rayder.I think he would have killed it.

The best season of Deadwood, no doubts. For me, the biggest flow is the early death of Bill Hickok, it was unexpected of course, but the we have seen him very little. Perhaps, thw creators was expecting, that viewers already knew him from the history.

Great call Wert. This is one of the best shows HBO has done. Such a bummer it was cancelled. Always held out hope for a movie but that doesn't seem likely at this point.

The writing in Deadwood is extraordinary - the most sophisticated work I've seen in modern TV. Plus it's such damn good fun, shocking, touching, just great.