Jeff Winger is a hotshot lawyer whose career has been brought to a screeching halt due to the slight problem of his qualifications being non-existent. He has to attend Greendale Community College for four years and pass a series of tests to regain his law credentials. An attempt to seduce a fellow student, Britta, by inviting her to a fictitious study group spirals out of control, resulting in the creation of a real study group. As the group goes through the school year, they learn and grow together. And also inadvertently create a copyright-infringing school anthem, give the college a guy in a gimp suit as its mascot and then almost destroy the place in a titanic paintball game that goes horrendously awry. 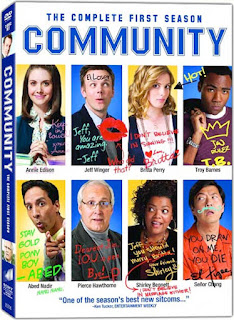 Community is entering its fourth season in the USA, but may be one of the best-kept secrets on television. Airing to mediocre ratings in the States and having almost no profile at all in the UK, it's nevertheless a funny, confident show which acts as both an obvious comedy and also something of a commentary on social dynamics and pop culture. The 'community' of the title is a reference to the central characters, who are all outcasts of one type of another, and their bonding together, and also to the wider college around them, personified through a recurring cast of tutors and other students.

Early episodes are mostly spent with the show trying to avoid cliches, with the character of Abed (Danny Pudi) always ready to compare an episode's storyline to something he saw on Friends or M*A*S*H*. This constant meta-commentary and attempts at ironic post-post-modernism are amusing but also slightly tiresome, with the show occasionally feeling a little smug with itself or else flailing at trying not to be caught between cliches. However, it's not long before the writers stop caring about that (at least quite so much) and instead concentrate on having fun. Community melds both the characters and the situations they encounter into compelling storylines that feel a lot longer than their modest 22 minutes-per-episode run times would suggest.

The actors are all excellent in their roles, particularly Joel McHale as Jeff, who has to make an inherently unlikable character likable without weakening the character, which he just about manages to do. The aforementioned Pudi is also great at portraying a character who initially appears to be the most predictable of the group but rapidly develops some interesting depths. Donald Glover takes the initially dull character of Troy and rapidly (by the end of episode two and its iconic Spanish rap number) turns him into a highlight of the show, thanks to some great comic timing. Yvette Nicole Brown's Shirley initially appears to be the 'mother' figure of the show, but some revelations about her personal life and gossipping tendencies turn that on its head. There's also a glorious cynicism about the character of Pearce (played by Chevy Chase, enjoying a career resurgence), a casually sexist and racist old man whose role in the group appears to primarily be making the other characters feel good about themselves. Alison Brie and Gillian Jacobs round off the primary cast as Annie and Britta, who initially both seem fairly straightforward characters before gaining more layers as the season progresses.

Slightly less successful are the supporting characters, most notably Ken Jeong as 'Senor' Chang whose character is rather broad (more effectively in some episodes than others) and Jim Rash as the Dean, who random weirdness (he has a sexual predilection for people in dalmatian costumes) is wearying. Still, both have their strong moments as the season progresses.

After the first few, slightly more pedestrian episodes, the season takes an upward turn in quality, culminating in the now-legendary paintball episode, Modern Warfare, when the show's ingredients combine together to create something hilarious, mildly emotional and completely demented, leaving the viewer eager to see what the writers and cast can do in the second year.

Season 1 of Community (****½) is well-written, sharply-acted and finely-observed, with more going on under the hood than you might expect from a situation comedy. The show is available now in the UK and USA.
Posted by Adam Whitehead at 19:58

Thanks for the review. Love this show. I agree that the season picks up steam as it progresses. Think I might start showing people Modern Warfare to introduce them, rather than the pilot. Since finding the show this year I've been wondering why a UK channel hasn't promoted it effectively.

I adore this show, and have for a couple of years now. It's great to see it get a little recognition outside the States.

And, FYI, Season 2 is even better.

I've been watching this show recently, and while in many ways it really is awesome (the dialogue between Troy and Abed being one of the things that keeps me coming back), it does suffer from an unfortunately tendency that I've noticed in shows recently. Being able to say whatever you want.

Now, it's a really specific thing, and it's 99% of the time done through Pierce, who is meant to be a sort of Loveable Jerkass character. But it bothers me a lot that he gets away with saying and doing what he does with little to no consequence. Even in the one Season 1 ep that there is some consequence shown, in him getting kicked out of the group for his constant barrage of sexist and racist comments, he gets welcommed back with open arms because without him to be the scapegoat, everyone turns on each other. Even ignoring the other circumstantial factors of Britta and Jeff being stressed out in that episode, that's still a load of BS, and it just reinforces the message that people can do what they want, when they want, and not have to face any real-world consequences.

It get that there's supposed to be some caricaturing in this show, but it still bugs the hell out of me, especially because I keep seeing characters and commentary like that in other very popular shows. (Sue Sylvester in "Glee," for example.)

I don't think Pearce is meant to be 'lovable' at all. He is shown as having almost no redeeming qualities whatsoever and the group solely keeps him around so they can feel superior to him. It's a very cynical tone to take.

I also understand that his issues continue to cause problems and consequences in later seasons as well.

"I also understand that his issues continue to cause problems and consequences in later seasons as well."

Both on a personal level, and as a character. Chevy Chase got the showrunner kicked of the show. While both the showrunner (Dan Harmon) and Chevy Chase are known to be, uhm, fucking assholes, only Harmon is key for further awesomeness.

In my opinion all three seasons have been a bit uneven, but the latter ones are still rather strong. In single episodes, both season two and three has one ep to hit my top 5 from sitcoms, maybe even top 3.

(I still can't underdtand how you liked The Walking Dead season 2 so much :P it's character drama failing at both it's characters AND creating good drama!)