From readings at two conventions, George R.R. Martin has revealed the full story of Aegon the Conqueror's invasion of Westeros and the subjugation of the Seven Kingdoms. This material (not yet 100% finalised) will form a small part of The World of Ice and Fire, due out in late 2013.


Rhaenys, Aegon and Visenya Targaryen, with their swords Blackfyre and Dark Sister.

The Valyrian Freehold expanded into the western coastal reaches of Essos some two centuries before the Doom. They colonised the island of Dragonstone in the Narrow Sea, establishing a stronghold there (presumably from which they could trade with the Seven Kingdoms). The Freehold was ruled by the Lords Freeholder, powerful noble families. The most powerful of these were the Dragonlords, those families which controlled and rode dragons in battle. The Targaryens were Dragonlords, but far from the most powerful. 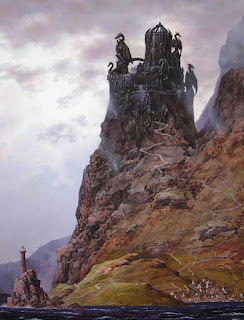 Dragonstone, the island stronghold of the Targaryens.

Twelve years before the Doom of Valyria, Lord Aenar Targaryen's daughter, Daenys, had a powerful prophetic dream that Valyria would be destroyed. Aenar heeded the warning and moved his entire family and their five dragons to Dragonstone. Closely allied families, including the Velaryons and Celtigars, went with them, settling on other islands in the Narrow Sea. Sure enough, the Freehold was annihilated in a single night of fire and storm, with great earthquakes and volcanic eruptions laying waste to the empire.

What followed was known as the Century of Blood (or Bleeding Years). Valyria's colonies and conquests broke away. The nine Free Cities were formed, only to fall into warfare against one another. The Targaryens chose not to intervene, hoarding their own strength. Of their five dragons, four died, leaving only Balerion the Black Dread as the survivor. However, two more eggs hatched. These dragons were named Vhagar and Meraxes, like Balerion named for the Valyrian gods of old.

The Targaryen Lords of Dragonstone were:
Aegon the Conqueror was born in 27 BC (Before Conquest), the son of Aerion and Velena. Tradition demanded that he should marry his elder sister, Visenya, but instead he chose to marry both (Visenya and his younger sister, Rhaenys). All three were dragon-riders before they were wed.

When still young, Aegon intervened in Essos, helping the Westerosi Storm King and the rulers of Braavos defeat a Volantene attempt to conquer the southern Free Cities. By doing so, Aegon showed he had no interest in reestablishing a Valyrian empire in Essos. Some time afterwards, Aegon began plotting an invasion of Westeros. Allegedly, he visited some Westerosi cities and castles in secret, noting the strength of each king and each lord, and the loyalty they commanded. Some maesters dispute this, however, with the official histories claiming that he never stepped foot in Westeros before the invasion. Whatever the truth, it is known that Aegon had commissioned an immense table shaped like a map of Westeros, from where he could make his plans. 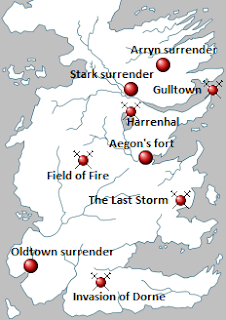 The major events and battles of the Targaryen Conquest.

Two generations before the Conquest, the ironborn had overrun and conquered the Riverlands under House Hoare. They commissioned the construction of a vast castle on the banks of Gods Eye, which was nearing completion before the Conquest began. King Argilac Durrendon of Storm's End (known as Argilac the Arrogant) was concerned that once the castle - Harren's Hall or Harrenhal - was completed, the ironbron would seek to invade his kingdom. He offered Aegon an alliance against the ironborn, offering to seal it with the hand of his daughter, Argella, in marriage. Aegon refused, instead suggesting that Argella could marry his bastard half-brother (and closest friend), Orys Baratheon. Argilac took that as an insult and cut off the hands of Aegon's envoy, sending them back with a message that these were the only hands a bastard could expect from the Storm King.

Aegon took counsel with his advisors and sisters. They sent ravens to each of the rulers of the Seven Kingdoms, informing them that there would only be one king in Westeros. Those that swore fealty to Aegon would be spared, otherwise they would be destroyed. The seven rulers at this time were:
In response, Aegon received an offer of marriage and alliance from Queen Regent Sharra Arryn, and an offer of alliance from Princess Mariya of Dorne against the Stormlands, but no offers of fealty. Aegon ignored these and took his dragons and soldiers, landing at the mouth of the Blackwater Rush with less than 3,000 men. The nearby castles of Stokeworth and Rosby surrendered without giving battle. Duskendale and Maidenpool surrendered after brief engagements. Their troops were added to Aegon's own forces.

Aegon proclaimed himself Lord of the Seven Kingdoms and King of Westeros. He named Orys Baratheon the Hand of the King and ordered him to take Storm's End. Aegon sent Rhaenys south with him. He ordered the Targaryen fleet (under Daemon Velaryon) to sail north and capture Gulltown, sending Visenya with them. Aegon himself, after establishing a redoubt on the tallest hill overlooking Blackwater Bay, then marched west.

A series of engagements followed with mixed results. The Arryn fleet engaged the Targaryen fleet and destroyed it, with Daemon Velaryon slain. Visenya burned the Arryn fleet, but was apparently unable to salvage the situation. However, the destruction of the Arryn fleet did trigger a revolt by the Sistermen against the Vale. Orys suffered a defeat in battle, but was able to resume the march on Storm's End with minimal losses. Aegon and Balerion burned Harren the Black's longships (presumably on the Trident and Gods Eye) before their army reached Harrenhal. 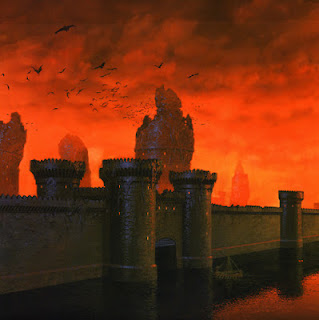 Harrenhal after its devastation by Aegon and Balerion.

Aegon's success inspired Lord Edmyn Tully of Riverrun to rebel against the ironborn. The rebellion spread and he was joined by the Brackens, Mallisters, Blackwoods and Freys. Their army marched south and joined Aegon's, allowing him to besiege Harrenhal with 8,000 men. However, Harren was unmoved by Aegon's threats, believing his walls would keep out even Balerion. Aegon ordered him to surrender or his line would be extinguished at sunset. As predicted, Aegon took his dragon high over the walls and burned the towers of Harrenhal until they melted. Harren died in fire.

Meanwhile, Argilac led his army from Storm's End. Whilst a huge storm raged, he attacked Orys's foces in what became known as the Battle of the Last Storm. Outnumbered two-to-one, Orys was outflanked, but Rhaenys and her dragon, Meraxes, plugged the gap. Orys came face-to-face with Argilac and slew him in combat. Argella proclaimed herself the Storm Queen and barred the gates of the castle, but her own followers betrayed her and handed her over to Orys, naked and in chains. Orys treated her with courtesy. For taking Storm's End he was named Lord of the Stormlands and given Argella's hand in marriage by Aegon, allowing him to found House Baratheon.

With word of Aegon's successes spreading, King Lorren of the Rock and King Mern of Highgarden met and formed an alliance. 55,000 men marched north to meet Aegon's 10,000. Rhaenys and Visenya rejoined him at Stoney Sept and the two armies met somewhere in the northern Reach. The three dragons set fire to the dry grass, spreading chaos and confusion through the allied armies. 4,000 would die from the fire and another 1,000 in battle. Aegon only lost 100 men. King Mern and his sons were all slain, so Aegon accepted the surrender of his vassal, Harlen Tyrell, Steward of Highgarden, as well as Lorren's. He confirmed the houses Lannister and Tyrell as rulers of the Westerlands and the Reach, respectively.

Aegon prepared to march on Dorne, but instead received word that King Torrhen Stark was marching south with 30,000 men at his back. Aegon led 45,000 troops to meet him at the Trident. Torrhen had initially planned to attack, entertaining a notion by his bastard half-brother Brandon Snow that they could assassinate the dragons by stealth. However, upon seeing Aegon's army and his dragons Torrhen lost heart. He sent Brandon and three maesters to negotiate before kneeling and swearing fealty.

Queen Sharra Arryn assembled an army at the Bloody Gate, planning to defy Aegon further. However, Aegon tried a different tack. He sent Visenya to the Eyrie by dragon. The Queen Regent rushed out into the courtyard to find her young son playing with Visenya and agreeing to surrender as long as he got to have a ride on her dragon. Thus the Vale also came under Aegon's control.

Rhaenys led an army into Dorne. However, the Dornish refused to give battle, instead melting away into the mountains and deserts, returning only to launch guerrilla raids on the army. Rhaenys captured holdfasts to no avail, as their people had already fled, leaving only the elderly and infirm. Frustrated, Rhaenys flew directly to Sunspear to demand Princess Mariya's surrender. Mariya instead informed her that, "This is Dorne. You are not wanted here, return at your peril." Rhaenys replied that she would return with "Fire and blood," but Mariya simply replied, "Unbent, Unbowed, Unbroken." The Targaryen army withdrew from Dorne, leaving the country untaken. 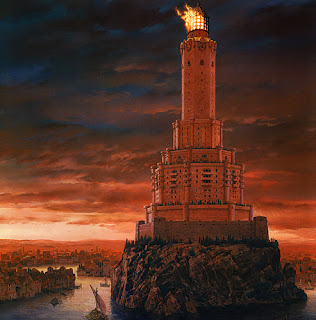 Oldtown's surrender marks the end of the War of Conquest, and the beginning of the Targaryen reign.

Aegon led the remainder of his forces to Oldtown. The High Septon prayed for seven days and seven nights in the Starry Sept before concluding that Aegon Targaryen was the rightful King of the Seven Kingdoms. Lord Banfred Hightower accepted that decision and threw open the gates to the city. Thousands of commoners and lords alike cheered Aegon's entry to the city. Aegon declared that the date of his rule - and of the Targaryen rule of Westeros - would be taken from that day. However, rather than make his capital at Oldtown he announced the construction of a new city around his old fort on the Blackwater: King's Landing. He took the swords of all the lords he had defeated in battle (but not those who surrendered with honour, like the Arryns and Starks) and melted them in Balerion's breath to form the Iron Throne.

Very nice, and gives a lovely, complete picture to the history!

Amazing how the more you read about ASOIAF, the more all pieces fit together. It's such a beautiful piece of fantasy. I really don't understand what the hell people who say "GRRM is making it up as he goes along" are thinking...

Well, he said himself that he makes it up as he goes along...

As usual, Wert, the definitive version...great job! I especially like the map.

Very nice summary, thanks for posting, missed it on Westeros.

Makes me wish he were a young, hungry writer with lots more of this stuff to come...

I for one would love to know what happened before Roberts rebellion til he took the throne, especially the tower of joy fight

So Cool!!! Doesn't exactly specify why Aegon decided to conquer Westeros, but those kind of details must be coming out later. Thanks for the great post!!!!1!11!

So cool! What exactly was Aegon's reasoning for conquering Westeros? I guess I'll have to wait for a more in depth version of this history to get that kind of info. Great Post!!!!1!11

I really wish we could learn more about the Dragonlords and Valyria. GRRM is an ace at lore, he should get on that.

Also, Dorne would have been conquered and bent the knee like the rest if Aegon cared less about his underlings. Luckily, he's not that kind of guy. Guerrilla warfare is a tough cookie to deal with.

It reminds me of the history of Egypt, i.e., Ptolemy (father of Cleopatra)although, Aegon married both of his sisters, decisions, decisions...