After the success of Game of Thrones, it was only a matter of time before other epic fantasy works were snapped up for translation to the small screen. Now the first has been announced: an adaptation of the Shannara novels by Terry Brooks. 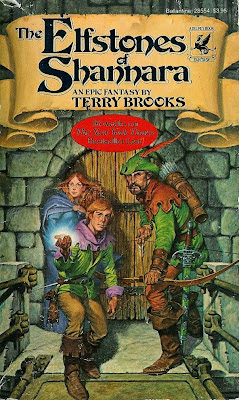 Terry Brooks's Shannara series was optioned several years ago as a big-budget movie to be helmed by Mike Newell, starting with an adaptation of The Elfstones of Shannara. This is the second novel in the series, chosen presumably due to 'significant' similarities between the first book, The Sword of Shannara, and The Lord of the Rings. However, the project stalled in development. Now it seems to have been revived, with Sonar Entertainment and Farah Films adapting Elfstones as a TV series. Sonar, under a different name, was previously responsible for the Lonesome Dove TV mini-series.

Obviously this is just an option, not a greenlight, and so far no director, showrunner or scriptwriter has been attached to the project.
Posted by Adam Whitehead at 22:07

I don't know...I'm not a big fan of those books anyway but if not handled well they could become the next legend of the seeker (in a bad way). I'd like to see someone tackle the miles vorkosigan novels, although considering the breadth and scope of the novels plus the main character alone, that might be a tricky thing to do on tv (never mind the budget).

did WILD CARDS get optioned for something?

Let's hope that it stays "just an option".
After 'Game of Thrones' (its flaws notwithstanding) did so much for the genre in terms of mainstream reputation and acceptance, it would be unfortunate to have Brooks and his childish stories ruin it all...

This is going to be awful.

I've only read Sword and wasn't a fan, but I wouldn't mind seeing what could happen. And I second the need for a Miles Vorkosigan adaptation!

If I was optioning any of Terry Brooks works, then the Landover books are more audience friendly and could tap into the mainstream similar to the Once upona time series. The Landover novels are simple but have all the elements for a continuing series. (but they need to make sure Abernathy does not call the Kobolds cannibals.. they just like eating dogs!)

Wild Cards has been optioned by Syfy for movies.

My point is yes, there's Game of Thrones, but there's also Merlin and Sinbad and whatever (and a few years back that Goodkind show).

Please don't mention "that Goodkind" show... horrible. Or the Earthsea one... horrible. For every successful fantasy they screw up a half-dozen trying to capitalize on it. Here's hoping they do it justice, Elfstones of Shannara was my favorite by far of the series, which was okay overall.