It's the second year at Greendale Community College for Jeff Winger and his study group, who are now taking an anthropology class together. Their mutual study time is again interrupted by a succession of unlikely adventures (ranging from Abed having a mental breakdown in which he envisages the world as a claymation film to a total paintball apocalypse) as they grow and learn together. Apart from Pierce, obviously, who becomes even more of an obnoxious bigot. 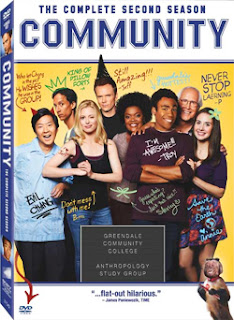 Season 2 of Community sees the show building on the moderate change in direction seen in late Season 1, when creator Dan Harmon started leaving behind more mundane storylines about relationships in favour of whackier adventures, often revolving around some kind of gimmick or high concept (albeit a well-executed one). Most of the episodes in Season 2 can be summed up by their concept: the bottle episode where everyone searches for Annie's missing pen; the claymation episode; the clip show which doesn't actually use any reused footage; the paintball war sequel two-parter; and the now-famous Dungeons and Dragons episode.

This move to a more concept-driven approach has both upsides and downsides. The show is definitely much more inherently funny in the second season, with both big ideas and small gags being delivered on a more consistently amusing basis. Unfortunately, this moves does come a little at the expense of serious characterisation. Annie and Abed both get some good scenes of emotional development, but other characters suffer: Britta is a lot less present this year and has less to do, whilst Shirley is all but missing in some episodes. Even our erstwhile main character Jeff seems much less the focal character and more just one of the band this time around. The issues with Jeff and Britta seem related to the fact that the will they/won't they dynamic of the first season has been resolved, but indicates there isn't as much to their characters as some of the others without that element. That said, Jeff gets a bit more to do towards the end of the season revolving around his (unasked-for) position as the group's leader and his conflicted feelings over that.

There's a larger secondary cast as well, with the introduction of the Dean's nemesis from a rival college and more recurring students in the anthropology class. Dr. Ian Duncan also has some great scenes as the teacher of the class (replacing ex-Golden Girl Betty White as Dr. Bauer, after a hilarious turn in the first episode of the season) and also a key role in the excellent claymation episode. The Dean is more bearable as well, mainly because he gets an (splendidly-lampshaded in the not-a-clip-show episode) amusing recurring gag. This larger cast makes the college feel busier and more like a real college, but also sometimes dilutes the focus on our core six characters.

Another challenge for the show is how it handles the character of Pierce, played by Chevy Chase. As established in Season 1 Pierce has racist and sexist views, but the show really seems reluctant to have him evolving away from them (since that would be unrealistic for a character of his age, whose views are more likely to be set in stone). At the same time, it's also unrealistic for the other characters to be so tolerant of someone who spends most of his time insulting them. This results in a story arc where Pierce turns into an outright villain whose antics put him at odds with the rest of the group. This is partially successful, giving us the 'Pierce's gifts' episode which is fairly decent, but otherwise sabotaged by the need not to go all-out with it lest it means Pierce not interacting with the rest of the characters at all. A simpler solution would have been to simply remove the character, but apparently the network considered him too key to the show to lose (and, in fact, choosing to remove even the showrunner over Chase between the third and fourth seasons). The entire issue is well-handled in the D&D episode, where Pierce is forced to play separately to the rest of the team (a familiar situation to most D&D groups where the characters become divided), but other episodes struggle to deal with it as well.

Overall, Community remains a funny, well-written and often extremely clever show in its second season (****½). It loses a little depth to the characters in favour of high concepts, but remains resolutely entertaining. The season is available now in the UK and USA.
Posted by Adam Whitehead at 17:37

While the statement that the characterization is set aside to an extent in favour of high concepts is broadly true, the episodes that DO feature characterization do a tremendous job with it and really deepen the characters, particularly "Mixology Certification" and "Intermediate Documentary Filmmaking". For that matter, I'd argue several of the "gimmick" episodes are quite strong on characterization as well--"Co-operative Calligraphy", "Critical Film Studies" and "Paradigms of Human Memory" may all start from a high concept, but they're ultimately about the characters, particularly "Paradigms". And then there's "Advanced Dungeons & Dragons", which is breathtakingly heartfelt and, I'd argue, not really a "gimmick" episode at all.