Bringer of Light by Jaine Fenn

Jarek, Taro and Nual's attempts to expose and defeat the machinations of the alien Sidhe continue. In alliance with the Minister of Vellern, their latest mission takes them to Aleph, the refuge of the male Sidhe after the devastating war with the females. However, the trio's assumption that the enemy of their enemy is their friend is soon shown to be hopelessly naive. Meanwhile, on the primitive world of Serenein, other allies against the Sidhe find their attempts to keep their people safe may soon be tested... 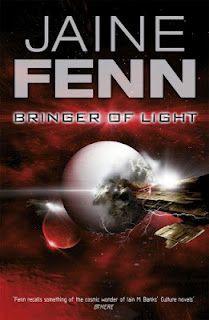 Bringer of Light is the fourth novel in Jaine Fenn's Hidden Empire sequence, which currently stands at five books. The series so far as been varied in quality, with great ideas often battling against so-so prose and a mixed bag of characterisation (our protagonists are well-drawn, but everyone else is sketchier). The previous book ended with a left-field revelation about a threat to humanity that dwarfs the Sidhe in magnitude that was fairly horrific and executed with deft skill. Whilst that threat is not much expanded upon in Bringer of Light, the upturn in writing quality that delivered it does at least continue through this volume.

The story is bigger this time, with Fenn juggling multiple storylines featuring established characters (Jarek, Taro and Nual visiting Aleph, Urien and Kerin on Serenein) and some newcomers as well. Ifanna's storyline on Serenein is an interesting addition to the mix, less of an antagonist than a well-meaning person drawn into cross-purposes against Kerin's goals (and from Ifanna's POV, fully understandably). All of this results in a somewhat longer book than the previous ones in the series (though at 400 pages it's hardly Peter F. Hamilton territory) and Fenn does a good job of handling the larger scope.

The previous problems in the series do remain, if less prevalently. There's too much use of modern colloquialism in the language and dialogue, which doesn't really sell the idea of the story being set seven millennia hence. There's a certain casual lightness to the story that makes it feel slight, despite some of the ideas and concepts being presented being fairly dark and disturbing. However, these issues are reduced in stature. In particular, Ifanna's story has some fairly unexpected twists and a disturbing - and somewhat tragic - ending that is a step above what we've seen previously. There's also an excellent twist at the end of the book that leaves things in a very interesting place for the following volumes.

Bringer of Light (***½) is a stronger volume in the series than what has come before, continuing to show the author's talents and confidence growing. That said, the feeling remains that the series has yet to hit its full potential. The novel is available now in the UK and USA.
Posted by Adam Whitehead at 15:19