Three young men find an online dating site where an older woman is propositioning guys for sex. But the advert is a trap, and they find themselves prisoners of a fundamentalist Christian cult who are trying to purge the world of what they see as amorality brought about by sexual permissiveness and tolerance. When their activities draw the attention of law enforcement officials, the stage is set for a violent confrontation. 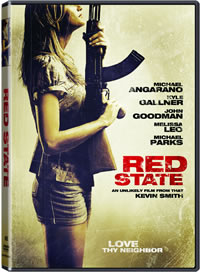 Kevin Smith is best-known for his string of comedic movies based on pop culture and lowbrow humour: Clerks, Mallrats, Jay and Silent Bob Strike Back and so on. He is also known for his interest in religion and theological debates, which, combined with humour, have formed the basis for arguably his most interesting movie to date, Dogma. Red State marks Smith's return to examining religion but this time around there are no laughs: the film is a straight-up drama.

After almost twenty years spent making comedies, it's good to see Smith trying out new ideas and breaking new ground for himself as a film-maker. It's such a shame then that Red State is a flat-out mess of a film. Many of the movie's weaknesses are also present in Smith's earlier films, but comedies tend to be much more forgiving of long run-on scenes and structural imperfections. Dramas, especially those with an undercurrent of psychological horror, are much less tolerant of such issues.

This problem can best be summed up by the movie's first half-hour. In the first fifteen minutes we are introduced to our three main characters, about whom we virtually learn nothing at all. Aside from their physical appearances, they are interchangeable and do nothing to attract our sympathy or interest. These scenes also establish the presence of a fundamentalist nutjob community in the town, that the town's sheriff has some personal problems and that these three guys are obsessed with sex. The following fifteen minutes form one, incredibly long and tedious scene in which the film's antagonist rants on against the evils plaguing America. Because of this John Goodman, the movie's biggest name, doesn't even show up until halfway through the picture.

The initial half of the film plays around with the ideas of psychological horror, such as the idea of the three prisoners being tortured or forced to watch the execution of other captives. But Smith doesn't have the patience for this and it isn't long before he ditches the idea in favour of a massive Waco-style shoot-out. Any attempt to engage seriously with the issues raised by the film are thrown out the window the second the shotguns and machine guns start being handed out and it isn't long before we are in the middle of what feels like the longest siege scene in American film history. Because of the failure to set up the action scenes in more depth, they also feel rather trite and manipulative, with Smith borrowing the visual imagery of religious cults and sieges such as Waco without actually engaging with them in any substantive way.

The movie does shine a few times: Goodman is great as normal and gets the best characterisation in the movie. Michael Parks is also excellent as the antagonist preacher leading the cult, even selling some of the worst-written scenes and dialogue in the movie. Kerry Bishe isn't given a lot to work with as the preacher's morally-divided daughter, but gives a solid performance as well. Pretty much everyone else in the film is forgettable. The script has potential, but is overwritten with dialogue scenes that go on for far too long after their point is made

Smith does attempt to introduce some moral complexity to the film by shining a light on the dubious activities of the American government in dealing with terrorism, but again in such a ham-fisted way that it comes off as both crushingly obvious and an excuse for more shoot-outs and deaths. And the less said about the ludicrous ending, the better.

Red State (**) shows Kevin Smith trying something new in his career, which is laudable, and also has a few good performances and ideas in it. However, it is also not very well-written, its structure and pacing is shot to hell and the serious issues it attempts to raise come across as paper-thin excuses for scenes of violent carnage. The film teeters on the edge of exploiting real, serious and tragic news stories for cheap thrills, which I am certain was not the director's intention. The film is available now on DVD (UK, USA).
Posted by Adam Whitehead at 16:25

Funny that your reviews of Red Country and Red State were posted on the same day...