The Walking Dead: The Heart's Desire by Robert Kirkman

Rick Grimes and his band of survivors have taken shelter from the zombie menace in an abandoned prison, only to become embroiled in an internal dispute. The arrival of a mysterious, katana-wielding woman sows further discord amongst the survivors. Events eventually prompt a moment of revelation for Rick. 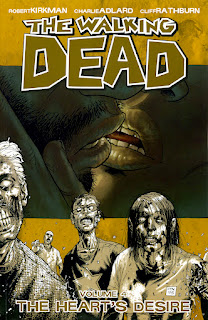 The Heart's Desire is the fourth graphic novel in The Walking Dead series, Robert Kirkman's 'zombie movie that never ends'. It immediately picks up the storyline after the third book, Safety Behind Bars and...well, doesn't go very far at all.

The Heart's Desire can best be summed up as the Crossroads of Twilight (the infamously static tenth novel of Robert Jordan's Wheel of Time sequence) of The Walking Dead. Nothing much happens of consequence to the overall story arc. The characters regrouping and taking stock of themselves after the first three books would make sense, but Kirkman is not a sufficiently good-enough writer of character to make this work across such a length of time. He is solid at plotting and structure, but his characterisation skills are highly variable (at best) and quite lacking during this particularly collection. The story breaks down into a melodramatic soap opera, with characters more concerned about who is sleeping with who and who should be in charge than actually dealing with the zombie menace or their own survival.

There are flashes of competence here, but these are not developed far enough. Michonne has a hell of an entrance and shakes things up a bit, but then doesn't really do anything. Rick angsts at some considerable length about the burden of command which would have made for a more interesting storyline if it hadn't been so badly-written. In fact, the entire book seems to be building to Rick's moment of self-revelation at the end which is puzzling: Rick realising that the zombies are not the 'walking dead' is something I think most readers latched onto in issue #1, and is the reason for the title of the entire comic book series. Kirkman presenting it as some kind of massive plot twist is simply inexplicable, and ends the book on a completely pointless note that led this reader with little desire to read on in the series. It is rather telling that the upcoming third season of the TV show will apparently condense the events of the third graphic novel with the one or two that come after it to create a far more compelling narrative than relying on the events of the third and fourth books alone.

The Heart's Desire (**) is a seriously sub-par and disappointing entry to The Walking Dead franchise. It is available now in the UK and USA.
Posted by Adam Whitehead at 18:40