War has gripped the planet Cybertron. Megatron and his Decepticons do battle against the Autobots under the command of Zeta Prime. Using a substance known as Dark Energon, Megatron launches a devastating assault upon Zeta Prime and the Autobots' greatest defender, Omega Supreme. It falls to a young and untested warrior named Optimus to lead the fight back against Megatron and his troops. 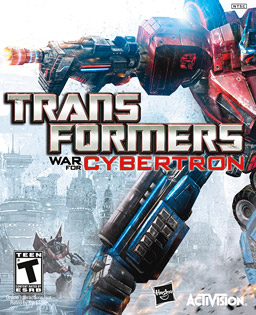 Transformers computer games have been a hit and miss affair over the decades, with the misses outnumbering the hits by quite some margin. For this latest computer game, Hasbro and developers High Moon Studios took a different tack. They decided to develop a backstory and canon exclusive to the game (Hasbro later tried to tie it into their new Prime continuity, but not entirely successfully) and which would not rely on tying in with any other continuity whilst being able to cherry-pick the best ideas and characters from them. This approach - similar to that taken by the recent Batman Arkham games - would hopefully deliver the hit game that fans were waiting for.

They were, to a certain degree, successful. War for Cybertron is easily the best Transformers computer game released to date. It's a tight, focused third-person shooter featuring multiplayer and campaign co-op. The emphasis is firmly on established, fan-favourite characters and on the G1 continuity family, even though the game is not directly linked to any of the established G1 storylines. Peter Cullen has been recruited as the voice of Optimus and, as usual, does great voice work throughout the game. Lines from the cartoon series and movie pop up at unexpected intervals, whilst elements of characterisation and backstory from the comics and animated series are included to delight hardcore fans. When Air Raid mentions Silverbolt being afraid of heights (despite being an aerial assault squad commander) or when it's revealed that Jetfire is a former Decepticon who defected to the Autobots, old-school Transformers fans will no doubt crack grins of appreciation. This extends to a hands-down brilliant boss fight with Soundwave, who disgorges his various minions from his chest to keep you busy and requiring you to defeat them (and their well-established special attacks, like creating earthquakes or sonic waves) in turn before taking him down.

This is all good stuff, showing a keen awareness of the franchise and its history which is laudable. The gameplay is also solid. War for Cybertron sees you controlling a robot and shooting other robots (a lot of other robots) with guns and sometimes missiles (but oddly, no lasers). Sometimes you need to transform into another mode to traverse scenery or to bring more firepower to bear on a situation. The game occasionally interrupts the shooting to have you push a button to open a gate to proceed. Rinse and repeat.

The gameplay is repetitive, but fortunately the developers seem aware of this danger. The levels are fairly short and the different characters and the different weapons available combine to provide some variety in how to deal with situations (although these are more variations on the theme of shooting and blowing things up). The writing is also decent, being of its own ridiculousness, with the likes of Soundwave and Omega Supreme getting some gloriously OTT dialogue in keeping with the spirit of things. There is a nice line in humour ticking through the game as well which keeps things entertaining.

Graphically, the game is no great shakes with some fairly low-res textures. However, the environmental design is great (if a little bit over-used by the end of the game) and the character design is solid. The traditional G1 designs have been altered to create something roughly halfway between the bright, primary-colour-driven original cartoon characters and Michael Bay's grittier, spikier designs (though, unlike the Bay movies, the characters are all easily identifiable from one another), which works well. The game's insistence that all the Transformers fire bullets is a bit odd - I wouldn't mind seeing a return to the lasers of the original G1 comics and cartoons - but can be borne.

Whilst all of this stuff is good, the game still suffers from some issues. It's not the longest game in the world (though this prevents things getting over-used and too stale) and it struggles a bit to accommodate the transforming mechanic. Transforming is often used to get from one combat area to the next or as a way of using more weapons when your robot-mode guns run out of ammo. The game really explodes into life in certain boss fights and large areas when you can use both robot and vehicle abilities to their fullest. However, these areas are fairly rare. Sequences where you are exchanging fire with enemies down long, tight corridors like any other third-person shooter do feel like a waste of the licence. One can't help but wonder if a Far Cry-like approach - giving you an objective an a large open world area with lots of options to accomplish it in - would result in a stronger game.

Email ThisBlogThis!Share to TwitterShare to FacebookShare to Pinterest
Labels: transformers, war for cybertron