All three HOBBIT movies dated and given titles

With the decision taken to split the two Hobbit movies into three, a question mark was raised about how the films would be titled and when they would be released. Warner Brothers have now answered those questions. 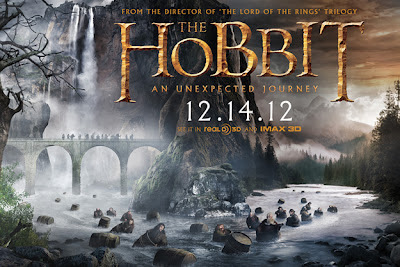 The three movies will be called:

Interesting news, though to be honest I don't think the second title works that well. Even assuming the film's title comes from its conclusion (basically the end to the book, The Hobbit), that still doesn't seem to leave a lot of material for the third movie.

Whilst Jackson has repeatedly defended the decision to split the slim novel (less than one-third length the size of The Lord of the Rings) in three on the basis that there is material in the appendices of The Lord of the Rings to mine, this claim has not withstood close scrutiny. The overwhelming majority of the appendix materials from Lord of the Rings are not suitable for filming (consisting of information on calendars, languages and timelines) and a lot of what's left over was already employed in the Rings trilogy (such as Aragorn and Arwen's relationship). A small amount of material on the dwarves from the appendix could be used for the Hobbit trilogy but little else. Most of Tolkien's writing connecting The Hobbit more firmly to The Lord of the Rings was published in Unfinished Tales, and Jackson and his team do not have the rights to use any material from that book. This suggests that the bulk of the material which will be used to inflate the slim novel into three two-hour (at least, presumably) movies will be the pure invention of Jackson and his co-writers, and considering how often such inventions were the weakest parts of the Rings trilogy, this is not a heartening prospect.
Posted by Adam Whitehead at 16:14

It doesn't looks like the end of the book will be at the end of second film. The battle should be at the third.

And to little material doesn't seem such a problem, perhaps, there will be no four-hour extended versions.

could be quite simply that they decided to not release extended editions dvds like with lotr and only make the single "theatrical release" for The Hobbit. and they make more money at the box office that way I guess. 120min*3 would be a bit more than half the length of extended ed. lotr.

I have no doubt that these movies will be good. That being said I’m really surprised that Jackson has been so vocal about how much material in the appendixes he can use. That he claims they are basically extended material Tolkien created for the Hobbit is pretty much bullshit. Anyone who has actually read the appendixes know that isn’t true, there’s maybe 10 pages of material that has anything to do with The Hobbit, and most of it is backstory.

I think the movies will be great though.

I'm a big worried that they'll squeeze three movies out of this by stretching out every fight/chase scene into ten minute CGI extravagansas. I'm trying to have faith though.

i guess, he could mean a few lines in the timeline of the third age as a lot of material, something like Gendalf in Dol Guldur and else.

I'm going to assume "The Desolation of Smaug" refers to the land around Smaug's mountain, presumably meaning that the second movie chronicles the companions' trip across that space. Of course, that still leaves them the whole third movie to detail the defeat of Smaug and Bilbo's return to the Shire. I wonder if "There and Back Again" will have an order of magnitude more endings than "The Return of the King."

This news actually just upset me... Basically I`m not gonna get to see the part I want to see until the last movie. The book is smaller than Lord of the rings... HOW does he expect to stretch it out