Shadow Tactics: Blades of the Shogun

The Shogun of Japan has unified his country after years of war, but a new warlord named Kage-sama has arisen and is gathering allies. The Shogun tasks an elite samurai warrior, Mugen, with identifying Kage-sama and defeating him. More comfortable fighting on the battlefield than from the shadows, Mugen assembles a crack team of unconventional warriors to aid him: shinobi Hayato, courtesan-assassin Aiko, elderly crack marksman Takuma and young thief Yuki. Together they set out to defend Japan and its Shogun from a shadowy enemy. 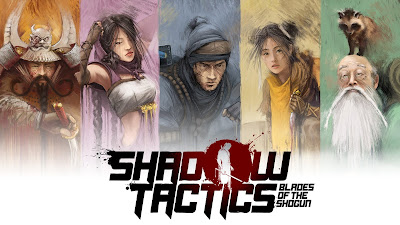 Back in the late 1990s and early 2000s there was a flurry of games played from an overhead perspective that emphasised stealth, skill-based gameplay and player freedom on how to complete objectives. These included the three-game Commandos series (particularly the second), the two-game Desperados series and the one-off Robin Hood: Legend of Sherwood. These games were noted for their atmosphere and level of challenge. They gradually faded away as developers chose to switch to first and third-person perspectives for stealth games.

The most recent title to dabble in this genre recently was the excellent cyberpunk game Satellite Reign. Ostensibly a spiritual sequel to the 1993 combat-heavy Syndicate, Satellite Reign took the opportunity to change things up and add classes, skills and stealth systems, making it more like a cyberpunk Commandos but with a more viable choice between combat and stealth. Shadow Tactics: Blades of the Shogun is made by a completely different developer, but both games use the Unity Engine and have some similarities in interface and feel, although obviously the aesthetics are completely different.

Once again you control a group  of agents who are given missions to perform. You can control anything from two to five agents per mission. Unlike other games in this genre, you don't create the operatives or decide on their equipment or skills. Instead you are given five characters, each of whom has a distinct personality, voice acting and backstory. This immediately personalises the game a lot more, with your team discussing how each mission is progressing and occasionally giving hints on how to proceed.

The game is played from an overhead perspective and you have to guide your agents through a location to achieve mission objectives. Sometimes the location is a town or village inhabited by civilians and you have to avoid giving away your position and remaining undetected (if you have to kill people to do that, so be it but the game does give out achievements and badges for nonlethal approaches). Most levels, however, are crawling with enemy soldiers and samurai and you are given freer reign to kill your way to victory. However, this is more easily said than done. Your characters are relatively fragile and enemies are quick to give the alarm if they see you. Each enemy has a "viewing cone" which shows if they they will spot you if you start moving. Sometimes taking an enemy down is as easy as sneaking up behind them, stabbing them and moving their body into the nearest bush. Basic soldiers are also easy to distract, either through Hayato throwing rocks, Takuma's pet Kuma doing tricks or Yuki's flute luring them into a trap, but more disciplined troops (wearing straw hats) are much more vigilant. Toughest of all are samurai, heavily armoured troops invulnerable to most attacks and who can only be killed by Mugen in honourable combat or brought to their knees by gunfire and then killed in melee.

Sometimes groups of enemies have to be taken down simultaneously through "Shadow Mode", allowing you to queue up one action per character and then execute them at once. So if two guards are standing in each other's eyelines, you can arrange for Yuki to stab one in the back and Hayato to throw a shuriken at the other to take out both before they can raise the alarm.

Each character has a diverse skill set which can be used in tandem with other characters to come up with some epic game moments. Using Aiko's sneezing powder to briefly blind a guard whilst Mugen kills two other guards ten feet away with his Sword Wind attack and then run off with both bodies before the first guy can recover is hilarious, especially when the blinded guard recovers and wonders if he's going mad. There are also environmental actions possible, such as knocking rocks onto passing troops or bringing down tree branches to crush enemies in ways that look accidental. 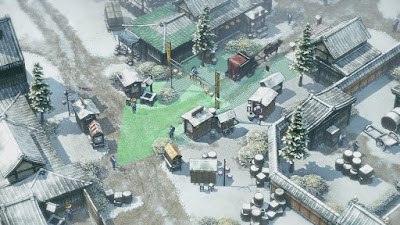 Each level is meticulously, fantastically well-designed. Each obstacle has multiple ways of overcoming it and, because Blades of the Shogun is a game of systems rather than planned set-pieces, some of them were never expected by the developers. This leads to tremendously satisfying emergent gameplay moments, such as when I used a cow as a way of safely eavesdropping on two samurai standing two feet away, or created a "tower of death" with Yuki luring passing guard after passing guard to its summit and their doom (I think I topped out at about 15 bodies hidden in the tower).

The game's graphical style is beautiful, varied and always compelling. Character models are relatively undetailed due to the bird's eye view, but well-animated with characterisation being helped by body language as well as the very good voice acting. The music is minimalistic but accomplished.

The game works brilliantly. Coming up with a plan to take down two or three enemies at the same time without alerting the camp and then executing it is tremendously satisfying, but adapting on the fly to changing circumstances can also be exhilarating. If you're discovered and the alarm goes up, staying and fighting head-on is suicidal but if you've planned for it, laid traps and got the right characters in the right place, you can still wreck mayhem on the arriving troops. On one level Mugen ambushed a strung-out line of reinforcements with devastating efficiency, killing over 60 enemies whilst remaining undetected. The stealth model is also vigorous, fair and even a little bit forgiving. Generally if the alarm goes up, it's because you haven't done enough preparation, positioned a character incorrectly or chose the wrong tactic.

That said, the game's interface could be a bit more streamlined and context-sensitive. You have to select an action - even the basic attack - and then click on the target, which feels more cumbersome than it should be. The camera controls are also not the most reactive, with mission objectives occasionally failing because you couldn't spin the camera fast enough to click on the right spot, which is aggravating. Finally, the game has problems working out if you are trying to get a character to jump on top of a wall or hide behind it, resulting in delays, more camera-spinning and the risk of discovery.  However, it takes only a couple of levels to learn the limitations of the engine and adjust to it accordingly.

Games of this type are traditionally light on narrative and story, but Blades of the Shogun has a compelling story told through the five characters you guide from mission to mission. It's not going to win prizes for originality, but it's fun and there are a couple of unexpected twists.

Shadow Tactics: Blades of the Shogun (*****) is an addictive, challenging and highly enjoyable game. It has a great story and characters, coupled with some impressive freedom on how to complete objectives. I wasn't expecting a game to come out of nowhere and very nearly walk off with the title of best game of the year, but Shadow Tactics makes a very strong case for it. The game is available on PC from Steam and GoG now. You can also download a free demo from Steam and GoG to try the game before you buy. The game will be released on PlayStation 4 and X-Box One in 2017.
Posted by Adam Whitehead at 20:20