The world of Terratus has fallen under the heel of the Overlord Kyros. For four centuries the armies of Kyros have spread across the known world, conquering territory after territory, until only the southern landmass know as the Tiers remains contested. Two of Kyros's armies, the Disfavoured under the command of Graven Ashe, Archon of War, and the Scarlet Chrous led by the insane mage Voices of Nerat, Archon of Secrets, are tasked with crushing the latest rebellion in the Tiers and securing the region. But their mutual rivalry and hatred is threatening to spill into open civil war. A Fatebinder is sent to adjudicate the dispute and help bring an end to the dissent against Kyros's Peace. 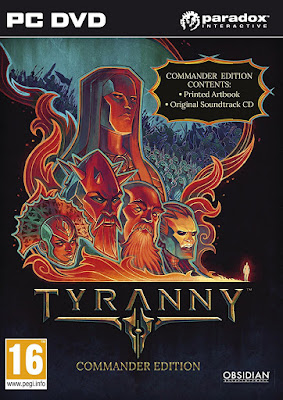 Tyranny is the latest computer roleplaying game from Obsidian. Both under their current name and their former incarnation as Black Isle, they have created many of the greatest CRPGs ever made: Icewind Dale, Planescape: Torment, Fallout 1 and 2, Fallout: New Vegas, Knights of the Old Republic II, Neverwinter Nights II and the recent South Park: Stick of Truth and Pillars of Eternity. Tyranny uses the same engine as Pillars of Eternity and players of the latter game will immediately find themselves at home. However, Obsidian have updated and refined their engine and interface, making Tyranny in many ways the superior game.

The central conceit of Tyranny is that the bad guys have won. The Dark Lord has conquered the world, the great heroes have died and all that is left is the mopping-up. This is when problems arise, as with no real enemies left to fight the forces of evil are showing signs of turning on one another. It's your job - as the Fatebinder - to keep this from happening. Well, if you choose. Tyranny has a lot of focus on choice and consequence, and if you wish you can plunge both factions into war for your own advantage, side with the native rebels against Kyros's will, or try to conquer the region yourself. The game has a lot of choice, with different consequences for those choices. This gives the game a lot of replayability.

The game plays like Pillars of Eternity, Baldur's Gate or many of the other great isometric RPGs. Controlling things from above, you assemble a party of four (from a total of seven possible characters) and have to complete a lot of quests. Some of these quests are quite linear, but many are lengthy and open-ended, with lots of different options on how to proceed. Depending on your decisions, entire areas of the world map may be closed off, unvisited until your next play-through, and different characters will live and die by your word. There is a lot of combat in Tyranny, which is undertaken in a similar, real-time-with-pause format to Pillars of Eternity and the old Infinity Engine games.Combat is more enjoyable than in Pillars, with meatier and more interesting builds and options available. There is also an impressively sophisticated spell-creation system, as well as the ability to develop several different strongholds, allowing you to build your own power base. 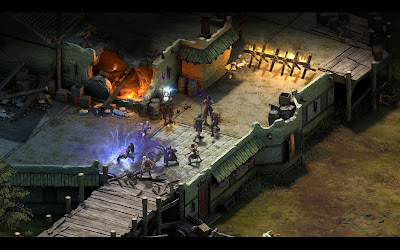 The game is imaginative and well-written. Although traditional in structure, the world is more primitive than many fantasy ones, being on the cusp of the bronze and iron ages rather than the standard cod-medieval level of technology. The game is deeply concerned with the nature of evil and it's surprising how quickly players who usually choose the "Good" or "Paragon" options in games will start justifying execution, massacres and mass starvation as long as it's for "the greater good". The insidious nature of evil and corruption is something that Tyranny handles extremely well, with a lot of nuance.

The writing is of a high standard and characterisation is particularly strong: the once-honourable, now-ruthless general Graven Ashe, the crazed Voices of Nerat and your companions characters are all strongly delineated characters with interesting backstories and their own, sometimes contradictory motivations. This is easily the best cast of characters assembled for a CRPG in many years.

There are some negatives. The version of the Unity Engine that Obsidian is using doesn't allow for very large maps, so both outdoor areas and dungeons are made up of interlocking, relatively small areas, far smaller than even the eighteen-year-old Infinity Engine is capable of. This feels slightly restrictive and unnecessary. There's also quite lengthy load times which, given the relative simplicity of the game's design and graphics, feels totally unwarranted. Some people may also find the game's 20-hour playing time a bit on the short side, especially compared to Pillars of Eternity's 40+. However, Pillars outstayed its welcome for far too long and Tyranny has enormous amounts of replayability, which favours a shorter running time. Finally, the game ends rather abruptly and almost anti-climatically, with a rather obvious sequel hook built into the finale. That's not so much of a problem, since I'd welcome spending more time in this world, but players looking for a more contained and definitively-resolved storyline won't really find that here.

Tyranny (****½) is a well-written, excellently-characterised and highly enjoyable roleplaying game. Its graphics are not cutting edge, but often wonderfully-designed, and the soundtrack is excellent. Most importantly, Tyranny genuinely manages to tell a morally-conflicted story and provides multiple interesting ways of resolving each problem. It's one of the better CRPGs of recent years and is well worth a look, despite a modest length and an open ending. The game is available now on PC.
Posted by Adam Whitehead at 17:33