American actress and writer Carrie Fisher has passed away at the age of 60. She is best-known for playing the role of Princess Leia in five of the Star Wars movies, a TV special and two video games. 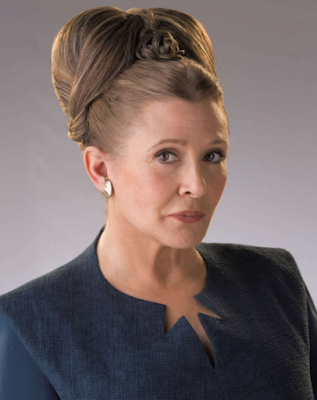 Fisher was born in 1956 in Beverley Hills, Los Angeles. Her father was singer Eddie Fisher (who passed away in 2010) and her mother was actress Debbie Reynolds (who has outlived her daughter). Although described as a quiet bookworm as a child, she followed her parents into showbusiness. Her screen debut came in the 1975 musical Shampoo but Star Wars (1977) was her breakout role. Whilst shooting the movie in 1976 she had an affair with co-star Harrison Ford, which was kept secret until earlier this year.

Fisher reprised the role of Princess Leia in The Star Wars Holiday Special (1978), The Empire Strikes Back (1980) and Return of the Jedi (1983). During this time she became addicted to drugs. She eventually overcame the addiction and publicly admitted her problems in her 1987 autobiographical novel Postcards from the Edge, which was adapted for the screen. This began a second career for Fisher as a novelist, non-fiction writer and Hollywood commentator. Acting roles continued with appearances in films such as The Blues Brothers, Hannah and Her Sisters, The 'Burbs, When Harry Met Sally..., Hook, Scream 3, Jay and Silent Bob Strike Back (alongside fellow Star Wars actor Mark Hamill) and Fanboys, whilst she wrote additional books including Surrender the Pink, Delusions of Grandma, Hollywood Moms, The Best Awful There Is, Wishful Drinking, Shockaholic and The Princess Diarist. In 2012 Fisher also appeared as a newscaster in the steampunk video game Dishonored.

She reprised her role as Princess Leia in the video game Super Star Wars: Return of the Jedi in 1994, but it was assumed that she would not reprise the role again given that George Lucas was developing a prequel trilogy of movies instead (which concluded with the birth of Leia). However, around 2010-11 Lucas entered discussions with Fisher, Mark Hamill and Harrison Ford about a possible sequel trilogy. In 2012 Disney bought the Star Wars franchise and rights and put the new films (albeit with a new storyline) into rapid development. Fisher appeared in The Force Awakens (2015) and also voiced Leia's appearance in the spin-off Lego Star Wars video game (although, contrary to some reports, she did not voice the character during a brief appearance at the end of Rogue One).

Fisher had completed filming for Star Wars: Episode VIII, which will be released in December 2017, and also completed her memoirs, The Princess Diarist. Whilst on a flight from London to Los Angeles after publicising the work she suffered a cardiac arrest and was taken to hospital.

Fisher is notable for achieving success in several different spheres, for being very public and honest about her life and for chewing up Hollywood as much as it had tried to chew her up. Her wit, humour and honesty, refreshing in Hollywood, will be missed.
Posted by Adam Whitehead at 18:34

Goodbye, Carrie Fisher. You will be missed.

I wonder what they'll end up doing. It kind of appeared that she was going to play a larger role in then next few movies since the main bad guy was her son and killed Han Solo. I wonder if they will rewrite and reshoot her involvement in episode VIII or simply recast her in episode IX

My guess is that they'll use her material for VIII and then see if they can use some of that material or cut scenes (and maybe cut material from VII) to justify her not appearing in IX.

I don't see them recasting her or doing the CG thing, it could be seen as being disrespectful.