The alien Swarm has been driven back into deep space. The band of villainous aces and jokers who tried to summon the Swarm, led by the Astronomer, have been defeated in battle and the victorious aces are taking some time out to enjoy Wild Cards Day 1986, the fortieth anniversary of the arrival of the alien virus on Earth. Unfortunately, the Astronomer hungers for revenge and sets out to murder all of the aces responsible for his defeat. 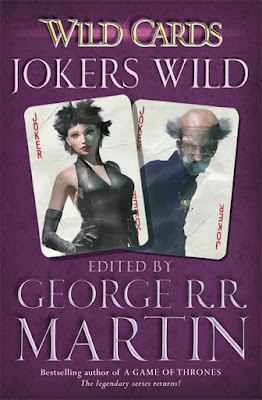 Jokers Wild is the third novel in the Wild Cards series and follows on directly from the events of Aces High. Having lost the battle in that book, the Astronomer is now out for revenge and begins cutting his way through the ranks of aces in New York City. Jokers Wild is interesting in that the entire book takes place across one day, so it's pretty unrelenting in pace, and also that it's the first "mosaic novel" in the series. Earlier books were collections of short stories which shared some events and characters, but mosaic novels actually intertwine around one another. The book reads as a regular novel, but each chapter is written by a different author and sometimes even sections and paragraphs within each chapter are written by different authors, who handle different characters and subplots.

This is a pretty noticeable phenomenon and for the first half or so of the book I found it seriously distracting, with sometimes jarring shifts in tone, atmosphere and prose style taking place. The somewhat relaxed and even jovial Hiram Worcester storyline (written by George R.R. Martin) and the adventurous Wraith plot (written by John J. Miller) didn't feel like it was really taking place in the same world as the sleazy, sexually explicit Fortunato stuff (written by Lewis Shiner) and the traumatising Roulette/Tachyon material (written by Melinda Snodgrass), despite the storylines all interacting with one another. This, combined with the disparate and wildly disconnected nature of the plots, made the first half of the book very tough going. 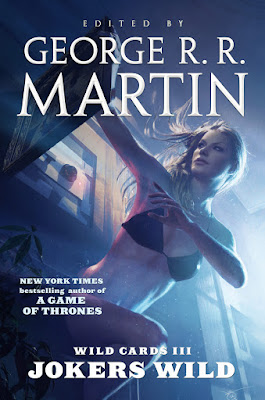 Fortunately, things gelled into place in the second half. The storylines start coming together and the way the heroes are working at cross-purposes without realising it becomes is quite cleverly structured. Eventually all of the scattered storylines come together in a massive, explosive and reasonably satisfying finale, even if the willingness of major characters to walk away and leave villains (who've just killed several of their friends) alive rather than either finishing them off or putting them in jail seems a bit implausible.

Still, if Jokers Wild (***½) is an experimental novel in structure and writing style, it is ultimately a successful one but takes quite a long time to get there. Accordingly, this is the weakest of the first three Wild Card books, but still a worthwhile read. The book is available now in the UK and USA.
Posted by Adam Whitehead at 18:22