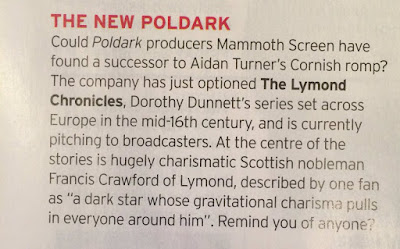 The Lymond Chronicles tell the story of Crawford Lymond, a 16th Century Scottish gentleman and renaissance man skilled at music, history, science and war. His formidable skills are called upon by several different European states to aid them in times of crisis. The series comprises  The Game of Kings (1961), Queens' Play (1964), The Disorderly Knights (1966), Pawn in Frankincense (1969), The Ringed Castle (1971) and Checkmate (1975). Dunnett later wrote an eight-volume prequel series, The House of Niccolo (1986-2000), and considered the two series to comprise one story.

Dunnett (who passed away in 2001) is widely regarded as one of the very finest writers of historical fiction, with her fans including noted fantasy authors Guy Gavriel Kay and George R.R. Martin.

Oddly, the news has been disclosed to print magazines but not been announced online yet.
Posted by Adam Whitehead at 13:59

The full press release, which included the news about the TV deal, was posted at http://dunnettcentral.org/archives/3925 on 30th November. Much to everyone's delight it also revealed that Dorothy Dunnett's books are to be reissued in the UK, starting in 2017 with the Lymond Chronicles.