CBS have confirmed that Star Trek: Discovery has found its lead castmember. 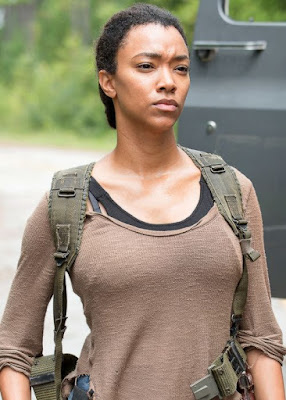 Walking Dead actress Sonequa Martin-Green, who has played Sasha on the zombie show for five years, will play the role of a Lt. Commander on the USS Discovery. It appears that she will, initially at the start of the series, be in a more junior role despite being the star of the series. All of the previous Star Trek series have focused on the ship or station commander as the main character (all of them captains apart from Deep Space Nine's Commander Sisko, who was promoted to Captain at the end of Season 3). This has led to speculation that the protagonist may play a junior role but will be promoted later on.

Martin-Green will apparently continue to appear on The Walking Dead as well, since Discovery is shooting in The Walking Dead's off-season and her character does not appear in every episode of the AMC show. She will be the first woman of colour to head a Star Trek series, following in the pioneering footsteps of Nichelle Nichols as Lt. Uhura, who was one of the first actresses of colour to appear as a regular on a TV show, on the original Star Trek; Avery Brooks, the first African-American actor to lead a Star Trek show as Captain Sisko on Deep Space Nine; and Kate Mulgrew as the first leading actress on a Star Trek show as Captain Janeway on Voyager.

CBS also recently confirmed that there will be a Klingon presence on the show, with Chris Obi (Roots), Shazad Latif (Penny Dreadful) and newcomer Mary Chieffo playing the roles of T'Kuvma, Kol and L'Rell respectively.