The Clone Wars are reaching their peak, but the Republic's victory is far from guaranteed. On Onderon a group of hardened rebels led by Saw Gerrera seek aid from the Jedi. A covert Republic infiltration squad is formed out of a band of droids led by R2-D2 and is dispatched on a deadly mission. But most dangerous is the unexpected return from the dead of Darth Maul. Allying with the Death Watch, he launches an assault on the planet Mandalore and seeks to lure his arch nemesis Obi-Wan Kenobi into a deadly trap. 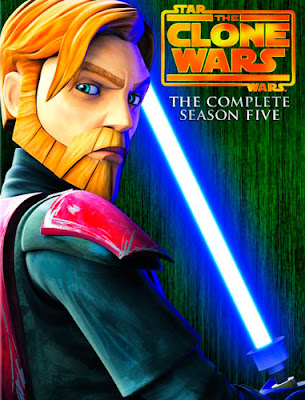 The fifth season of The Clone Wars takes a slightly different format to the proceeding ones, which mixed stand-alone episodes with longer-form story arcs. This season consists instead of five four-episode arcs. This allows for a slightly slower pace and more character and plot development instead of the frantic action and sometimes over-accelerated storytelling of earlier seasons.

The first arc (after a brief prologue dealing with Darth Maul) is set on Onderon and sees Anakin and Ahsoka join forces with Saw Gerrera (who was recently promoted to the live-action movie franchise with an appearance in Rogue One) and his band of rebels. This is a straightforward story which starts off with an interesting clash of tactics between Gerrera, who wants to use more lethal tactics and accept civilian casualties, and other rebels who adopt a more moderate tone. Unfortunately this clash of ideologies is not explored further and abandoned in favour of lots of action scenes. The story does end on a more ruthless and brutal moment than might be expected.

The second arc deals with a band of younglings undergoing a Jedi rite of passage on an ice planet, only to get caught up in a battle between pirate warlord Hondo and General Grievous. This is a fun arc, at least until your remember that all these kids get killed by Anakin in Revenge of the Sith, but it works quite well.

The third arc is by far the funniest. R2-D2 is assigned to a droid infiltration squad led by General Gascon, who feels he was chosen for his tactical skills and not remotely because he is the only Republic officer small enough to fit inside one of the droids. The result is a hilarious series of misadventures as Gascon and the droids attempt to steal some important data plans and get them back to the Republic no matter the cost. After watching this, I wonder how long it will be before Disney gets Pixar to make a Droids movie.

In the third arc Darth Maul and his brother Savage Opress join forces with Jabba the Hutt, the Black Sun syndicate and the Mandalorian Death Watch to conquer Mandalore and set up a new criminal empire. This story is cheesy but fun, with various bad guys from across the lifetime of the series joining forces to conquer a planet. Darth Maul's survival after being cut in half in The Phantom Menace is more than slightly unconvincing, but it does result in a pretty intense and epic storyline, particularly its tragic and powerful ending.

The final arc is the best, and the best thing The Clone Wars has ever done. Ahsoka is framed for a crime she didn't commit and goes on the run. The result is a stunning story with the best animation in the show's history and some very well thought-out characterisation. Cynically, the story is probably just a way of explaining why Ahsoka doesn't show up in Revenge of the Sith or die in Order 66, but it's tremendously well-handled all the same.

The fifth season of Star Wars: The Clone Wars (****½) is the best to date, with the new format working really well and allowing for better, deeper stories to be told. It is available now as part of the Complete Season 1-5 box set (UK, USA).

The sixth season of The Clone Wars was cancelled mid-production to make way for a new series, Rebels (now airing its third season in the States). The first 13 episodes of the season were finished and released as The Lost Missions, which I'll get to as soon as possible.
Posted by Adam Whitehead at 16:06