Fifteen years after the end of the Clone Wars and the rise of Emperor Palpatine, the planet Lothal is under the grip of the Galactic Empire. Petty thief Ezra reluctantly joins forces with group of rebels operating from the freighter Ghost. Their mission is to disrupt Imperial activity in the Lothal system...unaware that they are just one of many cells fighting the Empire across the galaxy. 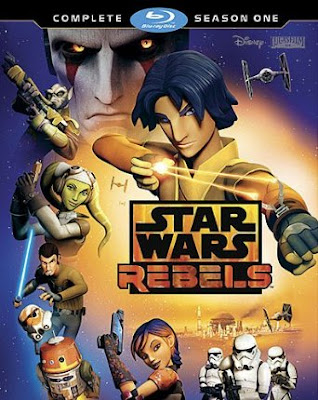 When Disney took over Lucasfilm in 2012, they rather abruptly cancelled the animated series The Clone Wars and requested that a new show be created to tie in with the "classic" Star Wars movies. Producer Dave Filoni and his team at Lucasfilm Animation could have phoned in some new kiddy's show, but instead took the experience and expertise gained on five-and-a-half years of The Clone Wars and applied them to the new project.

Rebels is the result. Beginning four years before the events of A New Hope, this new show has a "classic" Star Wars set-up, with a bunch of mis-matched renegades coming together on a cool spaceship to stick it to the Empire. The new characters are familiar archetypes: Ezra is the young, inexperienced thief; Kanan is the more experienced mentor figure; Hera is the professional, cool pilot and mercenary; Sabine is the slightly offbeat and hippy-ish expert Mandalorian marksman; Zeb is the blustering muscle; and Chopper is the irascible and unusually violent astromech droid. But they're well-drawn with some great voice acting and impressive character depth. When it comes to "misfit crew sticking it to The Man" stories, Rebels certainly fills the void left by Firefly and the Tales of the Ketty Jay novels.

It's also good that Rebels takes a very different approach to The Clone Wars. The Clone Wars was an anthology series, drawing on stories from across the entire galaxy and different periods in time. This was effective, but it also meant that some characters showed up once and were never seen again, or that ongoing character development was sometimes interrupted for half a season or longer as the focus moved elsewhere. Rebels is a tightly-serialised drama, with each episode following on from the previous one and even early-season, stand-alone stories are eventually revealed as tying into the main story arc in unexpected ways. Even minor villains get some pretty decent development.

There is a slightly different visual design to The Clone Wars and the show's first couple of episodes do feel like they are being aimed at a younger audience. But the show matures quite quickly and it's not long before more interesting stories are being told about the nature of good and evil. A scene where Grand Moff Tarkin shows up and "clears house" of the incompetent Imperial officers who've been repeatedly humiliated by our heroes is quite startling. The producers also don't hold back on some of the more morally questionable decisions taken by the Ghost crew: one scene where a jealous Chopper "kills" another droid in a fit of jealousy after the crew start praising him is both mildly disturbing and easily the funniest Star Wars scene in decades.

The stories flow quite nicely, there's some excellent action set-pieces and some amusing comedic moments. The conclusion of this first season also ties the series in better with both The Clone Wars and the movies, setting the scene for larger events to come.

The first season of Star Wars: Rebels (****) is thoroughly enjoyable for Star Wars fans of all ages. It is available now in the UK (DVD, Blu-Ray) and USA (DVD, Blu-Ray).
Posted by Adam Whitehead at 14:55

I struggled to cope with how emo Ezra was. He was so hard for me to watch that when Ahsoka finally appeared and I felt they'd butchered her look from the Clone Wars, I stopped watching.
I wanted to watch and like it, but I just didn't care in the slightest about Ezra's family or backstory; he just got in the way of my enjoyment of the show. If you're gonna do hurt/emo/abandoned you've gotta do it well.