Ash Williams and his team-mates Pablo and Kelly have forged a truce with Ruby, the creator of the Necronomicon, and gone on holiday to Jacksonville. However, Ruby's fellow evil forces have reneged on the deal, forcing Ruby to reluctantly seek out Ash and join forces with him. They return to Ash's home town of Elk Grove to confront and destroy Ruby's "children", but in the process inadvertently unleash the evil forces of of the demon Baal. 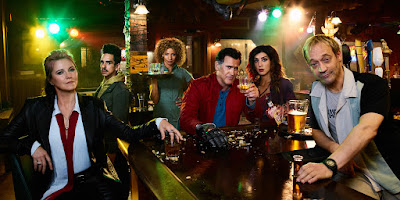 Ash vs. Evil Dead's first season was very much just what fans of the movies were hoping for: a carnage-strewn action-comedy vehicle that allowed Bruce Campbell to do what he's best at, killing monsters and cracking wise. It improved on that by introducing a team of supporting characters and actors who could also handle themselves and call Ash on his outdated, stereotypical viewpoints, whilst still ensuring that the heroic appeal of the character remained intact.

It would have been easy to do more of the same in Season 2, but the producers have cleverly evolved the premise. Taking Ash back to his home town where he is still blamed for the carnage from the first two Evil Dead movies, even by his deadbeat dad (a masterfully-cast Lee Majors, the Bionic Man himself), is a good move which expands on Ash's backstory and reveals more of how he ended up being the way he is. There's also a lot more inventiveness in the scripts, and a willingness to engage with other horror films. A Christine-influenced subplot has Ash and his friends being menaced by Ash's own car, whilst another episode riffs on Assault on Precinct 13, with Ash and some of the suspicious townsfolk trapped in a police station and under siege from evil forces.

Another episode sees Ash wake up in a mental hospital and having to confront the possibility that everything he thinks has happened is actually the result of a psychotic breakdown. Of course, that would be lame but the producers go all-out in this particular instalment, adopting a different shooting style and forcing the actors to up their game of dramatic intensity.

Events eventually lead - thanks to Ash spontaneously remembering the ability of the Necronomicon to travel through time (for copyright reasons Army of Darkness could not be referenced in Season 1, but is fair game in Season 2) - back to the cabin in the woods and a lot of callbacks to the first two movies. This is only partially successful, with some great riffs on the old material, but it does go on a bit long and the story takes a weird turn at the end. Behind-the-scenes drama, including showrunner Craig DiGregorio quitting after another producer interfered and rewrote the finale, is to blame for this. It remains to be seen if Season 3 can maintain the same standards now the creative team has changed.

The second season of Ash vs. Evil Dead (****) builds satisfyingly on the promise of the first season. It's even more inventive, willing to be more original and challenge the actors with more interesting material. It's even more bloody and even more disgusting, and some fans may be less keen on a dialling back of the comedy elements in favour of the horror (particularly towards the end of the season), but overall it's a highly watchable and extremely gory slice of entertainment.
Posted by Adam Whitehead at 15:29