The NX-01 Enterprise, Earth's first deep-space exploration vessel, continues to visit new worlds and make first contact with new species. However, Captain Archer's mission is complicated by rising tensions between the Vulcans and Andorians, the ongoing threat of the Suliban and internal dissent within the Klingon Empire which results in a price being placed on his head. 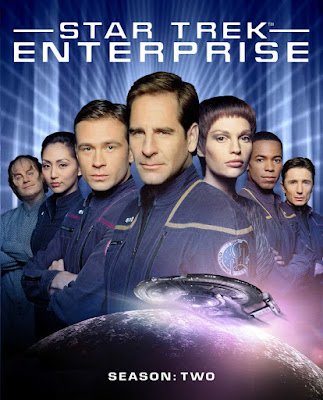 The first season of Star Trek: Enterprise was promising and intermittently fun, but it was also highly variable in quality, pulled its punches a lot and didn't have the courage of its convictions. A Star Trek prequel series featuring life at the rough end of space, humans establishing relations with races like the Tellarites, Vulcans and Andorians and featuring lots of low-tech solutions that Geordi or O'Brien would have fixed in five seconds in later series could be quite exciting. Enterprise doesn't do that, however. It's really just another Star Trek show, slightly bland and playing it safe whilst leaning a lot on Star Trek tropes that were exhausted long before The Next Generation ended, let alone by the time Enterprise was on air a full decade later.

The season actually starts off in an entertaining enough fashion, with T'Pol relating the story of a Vulcan science team stuck on Earth in the 1950s which does some typical but amusing culture clash stuff quite well. A Magnificent Seven-riffing episode has the crew help a team of miners defend themselves from Klingons and a war episode focusing on Andorians and Vulcans fighting over a contested moon is clever for how it shows that human flexibility can be an asset in resolving a situation that the Vulcans can't deal with through logic alone. There's also a solid Klingon trial episode starring J.G. Hertzler as a Klingon attorney and a very good first contact culture clash episode starring the late, great Andreas Katsulas as an alien captain who forms a bromance with Captain Archer over their mutual love of exploration. A late-season episode featuring a flashback to Archer's days as a warp test pilot (riffing on things like The Right Stuff) is also decent. There's a solid sense of character progression throughout the season as well, with T'Pol developing into a more interesting character and Phlox getting some interesting episodes as well.

The weaknesses from Season 1 remain intact, however. Trip gets far too many episodes dedicated to him when he is simply far too bland and uninteresting a character to merit it, Travis gets exactly one episode to do anything of interest in (and doesn't do too great a job) and Hoshi doesn't even get that. To be fair they do drop some of the more frustrating elements from Season 1 - the Temporal Cold War is pretty much forgotten about, apart from two episodes - and they also work on making the Klingons more formidable bad guys at the end of the season, but Enterprise remains firing on half-thrusters for most of the season. For every good episode there is a dull-as-dishwater one, and a couple that are flat-out terrible.

That said, the season finale is surprisingly good. The Suliban reluctantly form an alliance with Enterprise to combat a greater threat in a region of space known as the Delphic Expanse, setting the scene for the much more heavily-serialised third season.

The second season of Star Trek: Enterprise (***½) remains watchable and at times it lives up to the promise of the premise. But all too often it waters down gripping ideas into dull, Star-Trek-by-the-numbers morality plays and sells short its own potential. The season is available now on Blu-Ray (UK, USA) and on Netflix in the UK and Ireland.
Posted by Adam Whitehead at 14:17

Always loved Star Trek, but both Voyager and Enterprise were stale. They needed to get a little grittier in their story telling the same ways that DS9 did.