Veteran British actor Peter Vaughan has passed away at the age of 93. 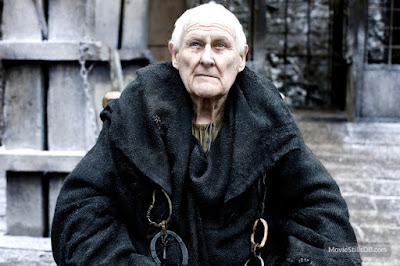 Peter Vaughan was born in 1923 in Shropshire. He fought in the Second World War, and after the conflict ended took up stage acting. He made his screen debut in 1959.

Vaughan was best-known to British audiences for his numerous character actor roles in comedy and drama, including memorable turns on Porridge and Citizen Smith and a 1990s resurgence in roles in Chancer, Our Friends in the North and the film The Remains of the Day.

However, he won a new legion of fans appreciators with his role as Maester Aemon in HBO's Game of Thrones. He appeared in the first five seasons before his character passed away at the end of Season 5.

Vaughan was a stalwart actor of British stage and screen for almost sixty years, with an impressive emotional range and ability. He will be sorely missed.
Posted by Adam Whitehead at 14:09