Freespace 2, originally released in 1999, remains the finest space combat game of all time, with impeccable pacing, story, combat and, for the time, visuals. Thanks to the developers, Volition, releasing the source code, modders have run riot for twenty years, constantly developing new mods doing everything from updating the graphics to adding entire new campaigns, some based on properties such as Babylon 5 and Battlestar Galactica. 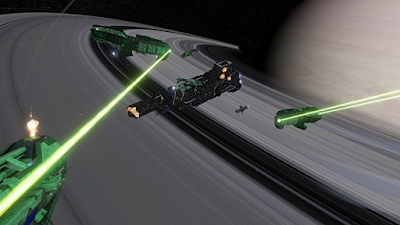 A new portal, named Knossos (appropriately, after the giant space portal in the game) has been launched to make modding for Freespace 2 easier than ever.

To use Knossos you need an install of Freespace 2. The game is available free, because the source code was released, but for convenience you can get a copy from GoG very easily.

Probably the best place to start is with the FreeSpace Port MediaVps mod, which upgrades all the graphics, models and lighting to the latest standards, and then FreeSpace Port, which updates the original Conflict Freespace: The Great War and its expansion, The Silent Threat to modern standards. Then dive into Freespace 2 itself before checking out the other material.
Posted by Adam Whitehead at 14:01