It's been confirmed - via a concept art and video leak - that a Judge Dredd animated TV series is in development. 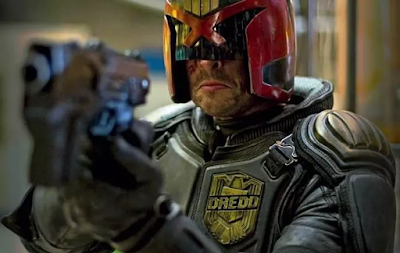 Judge Dredd is a British comic book series which has been running continuously in the weekly 2000AD comic since 1977 and the monthly Judge Dredd Megazine since 1990, so an animated series is true to the series' roots. There's already been one animated mini-series, Superfiend, which aired in 2014 as a thank you to fans of the 2012 live-action film starring Karl Urban, who've been campaigning incessantly since then for a sequel.

Rebellion Studios are developing Mega-City One, a live-action TV series about rookie Judges in the titular city, with the possibility of Urban reprising his role as Dredd on a recurring (but not regular) basis (he's very keen on the idea). The project has been in development since 2017, but has not proceeded due to Rebellion not managing to attract a production partner so far.

The animated series, starring Dredd more directly (potentially voiced by Urban, we hope), is a good potential companion piece and will allow for more spectacular adventures than a live-action budget may be able to accommodate. This also strongly suggests that Netflix may be the target partner, as they are keen on having live action shows with animated companion pieces (as with Altered Carbon and The Witcher).

Whether the development pitch gets greenlit is another matter, but an adult-focused Judge Dredd TV show is very much something I never thought I wanted until now. It's a great idea, especially if they adapt the classic stories from the comics run like Apocalypse War and The Dark Judges.
Posted by Adam Whitehead at 12:03