Mega-City One: a vast metropolis of 800 million people stretching along the Eastern Seaboard of North America and a safe refuge from the radiation-ravaged Cursed Earth beyond. Fifteen thousand crimes take place daily in this huge city and only the men and women known as Judges - law-enforcement officers who summarily evaluate crimes and dispense sentences - can try to keep the peace. 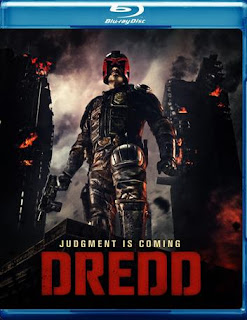 Cassandra Anderson is a new recruit to the Judges who has already failed one evaluation. She has been given a second chance due to her powerful psychic powers and Judge Joe Dredd, one of the city's most effective Judges, has been assigned to undertake her second evaluation. Anderson's test takes place in Peach Trees Block, a kilometre-high residential block of eighty thousand people, which has been taken over by a criminal gang and turned into a drugs factory. The two Judges have two hundred floors to ascend and countless obstacles in their way...and no back-up.


Dredd is the second attempt to make a live-action movie based on the extremely popular Judge Dredd comic book. First appearing in 2000AD in the late 1970s, Judge Dredd is a satire on police procedurals and action movies. In particular, it pokes fun at the fascistic idea of single 'good' police officers being trusted to carry out law enforcement without oversight (something presented as laudable in Hollywood cop movies of the 1970s and 1980s, with 'good' policemen being hampered by bureaucratic officials from doing What Is Right in their eyes). Another film version was made in 1995 starring Sylvester Stallone in the title role. Whilst the 1995 moved nailed the offbeat, demented feel of Mega-City One in the comics and had some great (if impractical) production design, it was a failure in the departments of story, character and Rob Schneider. The 2012 film improves upon it in almost every department (starting with the laudable decision to not cast Rob Schneider) to deliver a highly entertaining action movie.

Playing Dredd this time out is Karl Urban (or, more accurately, Karl Urban's Chin), who brings the requisite amounts of gravitas and presence to the role without descending into camp (as Stallone had a tendency to on occasion). He doesn't wisecrack (though a couple of his deliberately-understated reactions are quite amusing) but gets about business with relentless, grim efficiency. Dredd is presented as a force of nature. Staying true to the comics, he does not remove his helmet (unlike Stallone) and is presented as the faceless embodiment of The Law. However, he does have a highly practical and more flexible side to him, as shown by his willingness to ignore minor crimes, like vagrancy, whilst investigating much more serious ones. One of the limitations from the comic is that Dredd's character changes very slowly, only over years or decades, whilst writer Alex Garland only has an hour and a half to work with here. He can only hint that Dredd's opinions and character has been changed by his experiences in the block and with Anderson in the final scenes, but this is actually successful. Dredd himself looks surprised - or as surprised as a chin can be - by his final decision in the film which reflects his experiences.

Olivia Thirlby plays Anderson with understatement. Anderson is a rookie who takes the carnage of dispensing justice on the streets with much less stoicism than Dredd, but is not presented as weak, only inexperienced. Anderson's psi abilities allow her to take courses of action that Dredd simply never considers (and usually rather less violent ones) and are used in a manner that makes sense: an elaborate deception and trap that is laid for her fails in a rather spectacular fashion. With Dredd not evolving much as a character over the course of the film, it's Anderson whose character evolution and arc is more central to the film and this is handled well by the writer and actress. 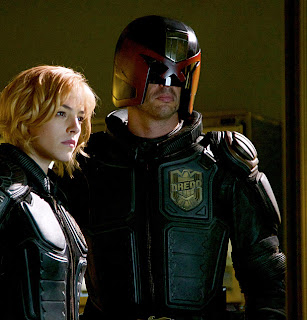 Opposing both is Lena Headey as 'Ma-Ma' Madrigal, the gang leader who has effectively taken over the block. Ma-Ma is presented as an utterly ruthless criminal whose backstory (one of abuse before killing her abuser and taking over his crime empire) is not allowed to excuse her actions. She is a sociopathic monster rather than a scheming villain, which would not fit in well with the film's stripped-down atmosphere. Headey does some excellent work with the material she's given, though we actually spend a lot more time with Wood Harris (noted for his role as Avon Barksdale in The Wire). Though given a fairly limited character, Harris also does some good work, particularly in his psychic sparring scenes with Anderson where he tries to shock her with mental imagery only for Anderson to turn them back against him.

The film has a laid-back, minimalist atmosphere. In early scenes this is disappointing, with Mega-City One looking suspiciously like a mildly CGI-enhanced versions of Johannesburg (where the movie was filmed). The crazy exuberance of the city in the comic, which is the one thing the 1995 movie did get right, is simply not present here and Mega-City One becomes just another characterless, futuristic cityscape. In particular, presenting the blocks as being massively spaced out means that the Block Wars of the comics are simply not possible now. However, this minimalism does work well once Dredd and Anderson hit the block and the mayhem kicks in. The aliens and robots of the setting are not in evidence, with Dredd and Anderson instead having to take on a tower full of human criminals (a tower considerably larger in volume than the Burj Khalifa in Dubai, for comparison's sake) in a focused hour or so of combat scenes and psychological warfare. Aside from a few moments that don't make sense (like a certain scene with three miniguns which is not only gratuitous, but completely pointless) these scenes are directed with energy, vigour and an awful lot of CGI blood.

CGI is used sparingly throughout the film, with real explosions, bullets and models preferred. The most notable special effect sequences are those involving the 'Slo-Mo' sequences, where time is slowed down to a fraction of its normal rate by drugs. These add an air of balletic elegance that counterpoint the more frenetic action scenes. The film's score is also a success, with stripped-down industrial tracks giving way to more appropriately atmospheric mood pieces during the Slo-Mo scenes.

Overall, Dredd (****) is a film that overcomes a low budget and limited premise though excellent performances (even by the bit-players), some impressive effects and a relentless pace, helped by a concise running time. Though the film's disappointing box office performance - which in the UK at least could be attributed to a crazy decision to not show the film in 2D in most cinemas - makes a sequel unlikely, I for one would welcome a return for Karl Urban's take on the lawman. The movie is available now on DVD (UK, USA) and Blu-Ray (UK, USA).
Posted by Adam Whitehead at 11:46

This was a really pleasant surprise had me all nostalgic for 80s-90s action flicks. Really strong cast as well. The only problem was Mega City 1 was not as madcap as it was in the comics although I feel it may have been a rather awkward fit with the films more serious mood.

Seriously, though, I'm glad that the character and story work seem to be good. This was one of those films that I didn't see in theater because my expectations were colored by Stallone's movie, but I'll check it out.

There’s an awesome-looking style to it that makes the action kick that much more ass, but in terms of action, I felt like they were missing something. Still, it’s a whole lot of fun. Nice review Adam.