Yeah, it's happening. Somewhat unexpectedly, since Sam Raimi jumping ship seemed to sink the project, but Legendary Pictures are now pushing ahead with an adaptation of the venerable RTS (and, more recently, life-destroying online RPG) series. 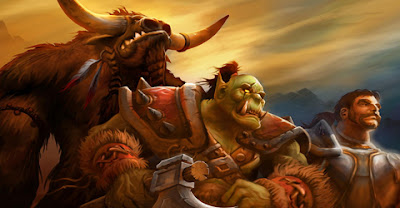 This news may attract a lot "Meh," from the audience, but there are two interesting things about the announcement. The first is that their director of choice is Duncan Jones, who previously helmed Moon and Source Code. Jones is noted as a more thoughtful, minimalist director than what you'd expect for this kind of project. The Hollywood Reporter is also reporting a budget of over $100 million: impressive, but nothing like the $200 million + you'd normally expect of a film of this magnitude.

At this point there is no word on casting or storyline, although Blizzard are going to be heavily involved. Blizzard lore-master Chris Metzen is consulting and advising on the script, so something faithful to the mythos is to be expected.

At this stage there is no word if an ironically Jack Black-voiced Pandaren will feature as comic relief.
Posted by Adam Whitehead at 19:13

Email ThisBlogThis!Share to TwitterShare to FacebookShare to Pinterest
Labels: world of warcraft

so excited for this.

I don't even care if it's good. haha

It is good news but completely baffled - so many are bored of World of Warcraft and its franchise the movie won't be any where near as successful than it could have been a few years ago. Still, I am curious as to how it turns out!

On the movie...I've been nervous from the get go about Blizz doing this, as the potential for it to be just another overdone action flick seemed high. But maybe it'll be better than I thought. We'll see, I guess!

To echo Hannah- I'm amazed that this movie is still being made seeing how WoW's glory days are clearly in the past...unless this somehow ties in to Blizzard's "Next Big Thing"- Titan.