Three years into the reign of King Arthur Pendragon, Camelot is experiencing a golden age. The people are prospering and Arthur's attempts to forge a peace between the kingdoms of Albion appear to be bearing fruit. But Morgana is still at large, vowing to destroy the kingdom. When Mordred - whom Merlin has foreseen will kill Arthur - joins the Knights of the Round Table, the glory days of Camelot are doomed and Arthur's path is set on a road that will lead to Camlann and Avalon. 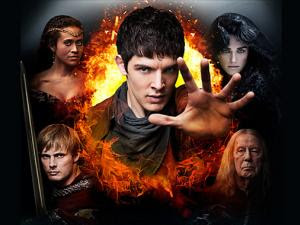 Over the course of its five seasons, Merlin has evolved from a simple kid's show to something more interesting. The show's early-evening timeslot still prevents much in the way of blood and gore from appearing, but the producers have shown a willingness over the last two seasons to embrace the Arthurian legends (even the darker elements) more wholeheartedly. They've dropped the tiresome 'comedy' episodes (which rarely raised a smile) in favour of pursuing the more dramatic parts of the storyline more intently and this has paid off.

The final season of Merlin is the show at its best. The actors have matured to the point where they can handle more dramatic storylines convincingly. In particular, the perennially under-used Angel Colby gets more to do this year as Guinevere with a disturbing multi-episode arc which tests the show's limits on what constitutes childrens' entertainment. Also well-served is newcomer Alexander Vlahos as the adult Mordred (he previously appeared in the first two seasons as a child played by Hugo's Asa Butterfield), who gets a highly satisfying storyline which avoids cliche and puts Merlin in a very difficult - and unlikable - position, which Colin Morgan rises to with skill.

Of course, the show has not lost all of its foibles. The same few patches of woodland are used to represent widely varying locales across dozens of miles. Camelot's security still has enormous holes in it. The geography of Albion still defies logic (especially when it is confirmed in the final episode that Albion - even with its Alp-like mountain ranges and vast canyons - is indeed supposed to be the island of Britain). Despite being proven right dozens of times, Merlin's suggestions and warnings are often ignored (even by those who know the true extent of his abilities). Morgana continues to be defeated every other week, leaving her as a rather toothless villain by season's end. The show also continues to have its young male cast strip to the waist at every possible opportunity, to the point of self-parody (note: may not be counted a fault by some). Some might also question the wisdom of leaving 'the big reveal' to the final episode, although it does provide Morgan and Bradley James with several of their best scenes together in the entire series. And, even though the show is more willing to push the boundaries of its audience and timeslot more freely than before, it still pulls its punches more often than might be wished.

For all of that, the show remains entertaining. The cast do good work and the writers clearly relish the fact they have a final ending to work towards. As the last few episodes tick down and several supporting cast are killed off (rather unpleasantly in some cases) the stakes are raised for a final episode that is surprisingly emotionally powerful (and truer to the legends than could have been expected a few seasons back). The ending isn't exactly wrapped up with a neat bow, although most of the questions that the series has raised are finally answered.

Merlin's final season (****) is a satisfying ending to the show. Whilst Merlin will never be counted as one of the all-time classic SFF series (and Game of Thrones has definitely stolen some of its thunder by tackling similar themes in a much more uncompromising way), it was still a fun show that evolved and matured away from its inauspicious start to become something much more interesting at the end. The season is available on two DVD box sets now, with a full-season set to follow.
Posted by Adam Whitehead at 16:42

I am Merlin's BIGGEST fan, and the way I see it, is that although the show's evolved, it has never been a "simple kids show". It was less dramatic back then, but I think that was done for a reason.