The Proof House by K.J. Parker

Thanks to the efforts of Bardas Loredan - fencer turned bowyer turned sapper - the city of Ap' Escatoy has fallen, allowing the Empire to begin its expansion into the lands held by the plains tribes. Loredan is reassigned to an imperial proof house, testing armour to destruction, until his previous relationship with the leader of the tribes is discovered. Loredan is the only person that Termai, sacker of Perimadeia, fears and the Empire plans to make good use of that fact in its invasion. 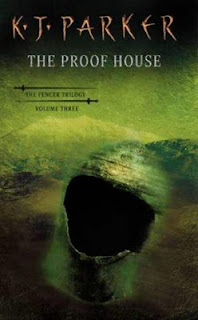 The Proof House is the third and concluding volume of K.J. Parker's debut work, The Fencer Trilogy. As with its two predecessors, Colours in the Steel and The Belly of the Bow, it's a novel that wears the clothes of epic fantasy but seems resolutely unimpressed by them. Wars, battles, sword fights, clashes of armies and so forth are all featured, but presented with dripping cynicism and sarcasm by the author, who is far more interested in her(?) characters. The Fencer Trilogy is less about the trappings of the subgenre and more about family relationships, particularly the extremely dysfunctional (to the point of murder) Loredan clan. The novel is driven, as to some extent the previous ones were, by Gorgas Loredan's insistence on repairing the damage he did to his family as a youth, utterly unaware that his crimes are past forgiveness or forgetting.

Elsewhere, Parker continues to base her narrative around the trappings of medieval-style warfare. The first book revolved around swords and the second around bows, with both standing as metaphors for the novels' themes. This continues in the third novel, which is about armour and how it is tested to be 'proof' against the pressures that will be brought to bear against it. This thematic element is a bit overstated in this third volume, with what was previously a subtle and clever analogy instead being rammed down the reader's throats with less nuance. This is a shame as other elements are handled in a far more enjoyable manner, such as the final conclusions about the Principal (including some interesting information about its temporal-manipulation effects) and the resolution of Temrai's storyline from the first novel. 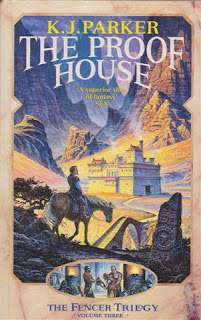 The novel's biggest weakness is the fact that a major new political power - the Empire - appears literally out of nowhere and is described as the largest and most powerful nation in the world with an army numbering in the millions (individual provinces can field armies in the hundreds of thousands by themselves), with its nearest borders being only a few hundred miles from Perimadeia, Shastel and other familiar locations. Yet it somehow went completely unmentioned in the first two novels of the series, stretching credulity past breaking point. This is a shame as the Empire is a reasonably well-constructed fantasy nation (as these things go) and the increasingly bemused meta-observations by one of its provincial officers on the plot is quite amusing.

The Proof House (***½) is a clever novel that uses the trappings of epic fantasy to criticise the subgenre intelligently, whilst also featuring some dark humour, nuanced characterisation and an appropriately messy ending. Some shaky worldbuilding and over-egged thematic elements leave it as the weakest of the three novels in The Fencer Trilogy, but still a worthwhile conclusion to the story. The novel is available now in the UK and USA.
Posted by Adam Whitehead at 11:02