In an interview with Empire Online to publicise his new TV show, The Following, James Purefoy has confirmed that he will not be appearing in Game of Thrones due to lingering annoyance with HBO over how they ended Rome, and that his co-star Kevin McKidd is of a similar mind. 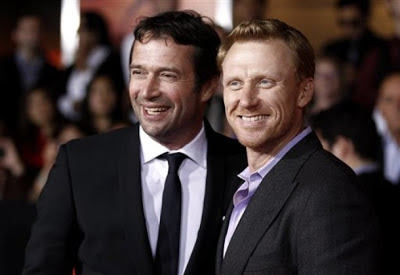 According to Purefoy, he and McKidd decided on this commitment over lunch:


McKidd and I had lunch the other day, and I said to him, "Have you been asked to do Game Of Thrones?" And he said, "I'd never do it. Because they stole our fucking show." He worked out that if Rome had run for the entire seven seasons that it should have run, we would only have finished it last year. And he feels that HBO did Game of Thrones instead of us, so they stole our show. I kind of agree with him. I won't be doing Game Of Thrones, even if they ask me.

Context: James Purefoy played Mark Antony on HBO's Rome, with McKidd playing the role of Lucius Vorenus. Rome ran for two seasons, airing in 2005 and 2007, and remains the most expensive ongoing weekly show that HBO has ever mounted (the budget for Season 1 exceeded $100 million, or $31 million more than GoT's second season). The show was a co-production between the BBC and HBO. When the BBC decided not to contribute past the second season, HBO cancelled the show for lack of funding and disappointing ratings. Some years later they acknowledged this was a mistake, with the show's performance on DVD and other foreign sales ultimately proving lucrative enough to sustain the show for further seasons.

An attempt was made several years ago by Rome showrunner Bruno Heller to get a spin-off movie off the ground, but this project never made it out of development hell. HBO are currently developing a fresh TV adaptation of Robert Graves's novel I, Claudius (not related to the 1970s BBC mini-series) which some are citing as a spiritual successor to Rome, but due to the much later time period no Rome actors are expected to appear.

Given that HBO was extremely premature - and ultimately proven mistaken - in its decision to cancel Rome, I can understand McKidd and Purefoy's decision not to appear on further HBO series. However, some of their Rome co-stars have chosen to take another view, with both Ciaran Hinds (Caesar) and Tobias Menzies (Brutus) joining Thrones in its third season, as Mance Rayder and Edmure Tully respectively.

Curiously, Purefoy was much more positive about Thrones in an interview eighteen months ago:


If it was the right role on Game of Thrones, definitely. Of course! It’s a terrific series. It’s a great series of books. I love HBO. I’m on record saying that HBO is the best television company in the world, and I believe they are. I think they absolutely understand how to make television that is really, really vital and interesting and visceral, and all the things that television really should be. I’m a big fan of HBO.

Email ThisBlogThis!Share to TwitterShare to FacebookShare to Pinterest
Labels: a game of thrones (TV series), a song of ice and fire, hbo, news, rome

Just bought both seasons on Bluray with a Christmas gift card at Best Buy for 20$ a piece. Money well spent.

Sounds like its a matter of loyalty to the show they were on, and not about what they think of HBO or GOT. Dissapointing news.

Most of us have conflicting opinions about a lot of things/people. It's not necessarily a matter of changing our mind - rather, when your mind isn't made up, one side sometimes comes to the fore, and sometimes another.

I suspect Purefoy believes both things: that HBO are a great company making great shows and he'd love to work with them; and also that HBO are the bastards who stole his show and he'll never work with them again. I guess that in the older quote he was more influenced by the first train of thought, but that meeting his old colleague and talking about what happened brought up bad memories, which made the second set of attitudes more prominent.

Still, he doesn't sound as fixed as Vorenus does. [No surprise there - trust Vorenus to hold a grudge and a loyalty, Anthony to be more... flexible]


[BTW, the worst thing isn't just that they ended Rome; it's that the second season of Rome was mutilated in the process. You can quite clearly see where at least two series have been amputated and then stitched together, to try to bring the show to a conclusion prematurely. The second season largely rests on Purefoy's brilliance as Anthony, one of the great character studies of the decade.]

Shame that neither of them will commit to it, because they'd both be ideal, but they have their reasons.

I bet Purefoy would change his mind if they offered him a bunch of money to appear in a short-term role - and they might, even after this. He could completely nail the "Red Viper" role, although I'd be a little disappointed if they didn't pick someone who looked more Arabic/Mediterranean for the role.

That said, maybe Purefoy was keeping his feelings down low 18 months ago, before he got the role on The Following. He's not going to alienate a big potential employer.

I don't know, this seems like a mistake, holding a grudge of this nature. And to Blame GoT for Rome being cancelled is a bit silly. Hope his show does ok.

Funny, I am just rewatching Rome right now. What a great show, so it's very sad it only got two seasons.

I can only imagine the calm, reasoned debate over this on WIC.

As good as Game of Thrones is I feel like Rome was better. It's too bad that the show didn't get the run that it deserved.

I'm surprised they were talking about Rome lasting seven seasons. I got the impression when it was airing that it was gonna be three seasons, and that they compressed the last two seasons into one.
Even though it was taken off air prematurely, it at least got a proper ending, unlike the greatest travesty ever committed by HBO; cancelling Deadwood!

I'm reminded of HBO's Deadwood debacle. Seems to be a habit.

Game of Thrones is great but Rome was better. The characters and acting were wonderful. Kevin McKidd, James Purefoy and Ray Stevenson were amazing as were all the other actors.

I agree with the comments that James Purefoy was of both minds and also that he was able to say more when he had a new show.

Rome was my favorite HBO show and they have had some great ones!

Quite disappointed with the role choices that Kevin Mckidd and Ray Stevenson had after Rome.They should fire their agents or chose better roles...

I'm watching again Rome, and it's may be the 4th time. And each time i like the series more and more. What is really disappointing , it s that they canceled the show.