Gollancz have announced that they will be publishing three novels based on the Elite series of computer games in 2014. 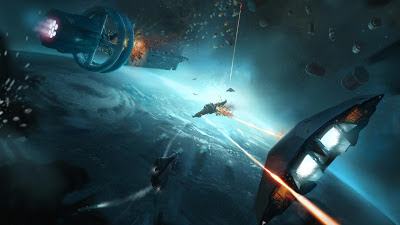 The new Elite game, Elite: Dangerous (the fourth in the thirty-year-old series), recently passed its funding goal on Kickstarter, ending with more than £1.5 million raised for game development. The title is expected to be released by mid-2014. To help the game reach its goal Gollancz pledged a significant sum on Kickstarter to buy the rights to publish three novels based on the Elite universe.

Gollancz had already been in discussions with David Braben and Frontier Studios about adding the original Elite tie-in novella, The Dark Wheel, to its SF Gateway online store. The Dark Wheel is notable as it was written by the late Robert Holdstock, best-known for his Mythago Wood series of novels. The Dark Wheel was packaged with the original BBC Micro release of Elite in 1984 (I still have a copy in a box somewhere). Frontier: Elite II, released in 1992, was also accompanied by a book of short stories entitled Tales of Life on the Frontier. Whether this will be reprinted at some point is unknown (but unlikely; it was not as good as Holdstock's novella).

The three novels will be published in 2014. The identities of the potential writers have not yet been revealed.
Posted by Adam Whitehead at 21:08