The dead have risen and the world has been thrown into ruin. A band of survivors gathers together to try to escape the chaos, but find that their greatest enemy may not be the walking dead, but themselves. 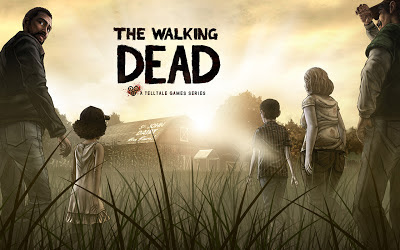 Much has been written about Telltale's computer game adaptation of Robert Kirkman's The Walking Dead comic series, usually involving such words as 'amazing', 'intense', 'emotional' and 'cried like a three-year-old'. They are not far off. With The Walking Dead, Telltale have achieved what may be the finest computer game adaptation of a pre-existing franchise in gaming's history, something that supports the original story whilst also standing completely on its own two feet.

The Walking Dead takes place in the same world as the comics (but not the TV series, which is an alternate reality) and is canon to them. The developers - working alongside Kirkman - take advantage of this to show off the backstory of comic characters Hershel and Glen, but for the most part the focus is firmly on the original characters created for the game. Chief amongst these is the player-controlled protagonist, Lee Everett. Lee is a criminal who was on his way to prison when the zombie apocalypse broke out, and some of the game's tension comes from whether he is honest or not about his background to his new-found friends.

The core relationship of the game is between Lee and eight-year-old Clementine, a young girl he rescues from a zombie attack on a house. A long-term goal of the game is to reunite Clementine with her parents (if they are still alive) in Savannah, Georgia, but as the game continues Lee becomes convinced that the chances of her parents still being alive are very slim and takes on a father-figure role himself. The relationship is well-portrayed by the writers and actors, with the apparent oddness of an unrelated non-parent (who is also a convicted felon) caring for a young girl he just met being addressed. The characterisation is extremely strong, though to so more of it may risk spoilers (a problem for any review of the game).

The game has echoes of events from other incarnations of The Walking Dead, such as whether it's a good idea to teach young children how to use firearms against zombies or not, but Telltale puts their fresh spin on each idea as it comes up. Particularly well-handled is the way that the same major worldbuilding bits of information from the graphic novels are discovered by this group of characters, but in a rather different manner to the comics. For example, the knowledge that everyone will become a zombie when they die (regardless of whether they are bitten or not) - a major revelation in the comics and TV series - comes up almost immediately in the game, whilst a more minor piece of info about the zombies that the comic series threw in almost immediately takes a long time to come up in the game, and is much more decisive (and horrible).

The Walking Dead's storyline is impressive, with the zombies acting as a catalyst for how the characters interact with one another and deal with the pressure of a crumbling civilisation. The game hits many of the same beats as the TV series and the comics, but in a much more immersive way due to the way your decisions have lasting consequences, and some events can be changed. The dialogue is well-written, with each of the five episodes having its own self-contained plot and thematic arc as well as contributing to the overall storyline of the game. Given the lack of time (even at 15 hours, there a lot of characters to get through), Telltale achieve an impressive amount of depth for each character in the game as well. In terms of writing, structure and pacing, The Walking Dead is excellent.

Where the game comes off the rails a bit is the gameplay. Simply put, you spend the majority of your time watching The Walking Dead, rather than playing it, and most of your controls are based around choosing dialogue options. The sections where you get to take control of Lee, talk to other characters at leisure, explore areas and solve puzzles are the most fun in the game, but also the rarest (roughly boiling down to one or two such sections per episode). There's also a significant number of irritating Quick Time Events as well. It's a tribute to the writing skills of the team behind the game that these issues are not the total game-killers they'd be in other titles, but it does make The Walking Dead less of a game and more of an interactive comic (though still a very good interactive comic).

More problematic is the fact that the game is sold as one where your choices matter, but the truth of that is up for debate. At one stage you choose to save one character or another and this leads to some different character scenes and dialogue for a while, but ultimately has no long-term ramifications. The major beats of the plot and most character deaths also happen regardless of your dialogue and choices, with what you do more impacting on other characters' reactions to you and what they do rather than anything substantive in the storyline. Oddly this doesn't seem to matter: moreso than in most games, it's the journey that matters much more than the resolution.

The Walking Dead (****½) is an intense, well-written and extremely atmospheric adventure game, but one where you do not have as much control over what is going on as what is promised or written. How much of an issue this is will be up to the player, but I found it easily ignored in favour of the smart writing and the fascinating character relationships. The Walking Dead: Season 1 is available now on PC, X-Box 360 (UK, USA), PlayStation 3 (UK, USA) and iPad/iPhone. A second 'season' will be released later in 2013.
Posted by Adam Whitehead at 18:06