Gaunt's Ghosts: The Guns of Tanith by Dan Abnett

The Sabbat Worlds Crusade's proud advance into enemy territory has overreached itself and is now under a vicious and determined counter-offensive. Gaunt and his troops are redeployed to the industrial world of Phantine, where the surface has been lost under a seething fog of chemical poison, leaving the remaining cities and vapour mills clinging to the tops of tall mesas and mountains. The survival of the Crusade now depends on Phantine and several other fuelling worlds being liberated to open new supply lines to the fleet. 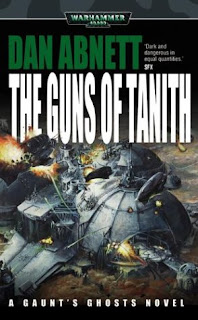 The lack of usable surface area on the planet rules out a conventional mechanised assault, leaving only one option to take the vital settlements of Cirenholm and Ouranberg: a massive airborne assault, something the Ghosts have never done before. As they prepare for battle, the murder of a civilian, apparently by a Ghost, unleashes a storm of suspicion and dissent within their ranks which Gaunt must quickly resolve before it damages their morale.

The Guns of Tanith is where the Gaunt's Ghosts series takes a much darker turn. Whilst we've lost a few minor characters along the way, this is where major, fan-favourite characters start biting the dust and an insidious presence makes itself known amongst their ranks. The Ghosts now have an enemy within and the twists and turns the plot goes through before revealing who it is are impressive. The final few pages of the book are a truly heinous gut-punch of a twist that will leave the reader fuming and shocked. 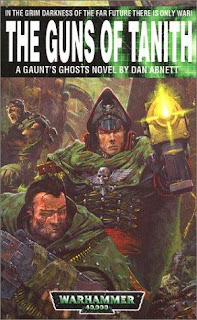 However, that is the subplot. The main story is about the two airborne assaults. The first is a full-on, all-out attack whilst the second is an infiltration making use of the Tanith's specialised stealth capabilities (the first time they've actually been used properly). Whilst Abnett makes a good job of differentiating the two battles as much as possible, there remains a feeling of repetitiveness. The secondary guest characters are less memorable this time around as well, with the sole exception of the eccentric Van Voytz, Gaunt's new commanding officer who manages to be an effective general and appreciates the Ghosts' abilities despite being also somewhat bonkers.

The book's weaknesses are more than made up for by the excellent twist that the new internal threat to the unit presents and also some crowd-pleasing moments in the book's finale (such as one where a character is invited to look under a table).

The Guns of Tanith (****) is where we start to say goodbye to some of the series' longest-established characters and where events take a darker and more interesting turn. The book is available now as part of The Saint omnibus in the UK and USA.
Posted by Adam Whitehead at 12:44

I've noticed you've read alot of the Warhammer novels, or at least, a few.

Anyways, I've always liked the idea of Warhammer, but, I've never played the game, other than the one on my PC.

Do you need any sort of background to enjoy these books?? Are you a fan of the game itself??

Just curious if I need to know Warhammer before grabbing a novel..

I've played the miniatures game very briefly but am not a huge fan. I do like the Dawn of War games, but other than that I had very little contact with the WH40K universe before reading the first GAUNT'S GHOST book, and had no trouble with it. The books tend to self-contained novels or series and let you know what you need to know about the wider setting as it comes up.