AD 40,773. The Crusade hangs by a thread. Warmaster Macaroth's main forces are bogged down in a devastating conflict on the fortress world of Morlond, exposing the Khan system on his flank to a decisive Chaos counter-offensive. If successful, this offensive will destroy Macaroth's line of supply and surround him. Gaunt and the Tanith First and Only are hastily redeployed to Herodor, second world of the Khan system, to meet the renewed Chaos thrust. On Herodor Gaunt is confronted by nothing less than a miracle, a turn of fate which could save the Crusade from disaster: the apparent reincarnation of Saint Sabbat herself. But this turn of events is timely and convenient, maybe too convenient... 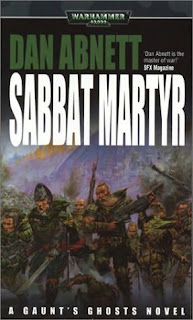 In Sabbat Martyr a number of storylines that Abnett set in motion as far back as Honour Guard climax. In that earlier novel we learned a lot more about the religious basis of the Crusade and Gaunt's own spirituality and religious conviction, something that comes full circle here when Gaunt's faith is by turns battered and reinforced. That book also marked the beginning of various sub-plots involving Ghosts such as Larkin, Cuu, Milo, Kolea and Soric which reach their conclusions in this volume, giving the book a more epic and decisive feel than some of the more recent volumes. If Gaunt's Ghosts ever became a TV series, this would be the big season finale.

Abnett mostly does a good job of juggling various long-standing plotlines with the book's own internal story, the battle for the city of Civitas Beati. In keeping with the recent trend to give each battle its own distinctive shape and atmosphere, Abnett deliberately makes Civitas Beati a wide-open, near-indefensible position to contrast to the earlier city fighting in Necropolis, which took place in a formidable and near-impregnable fortress-city. Here the fighting is believably chaotic and confused. 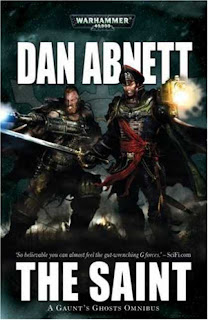 This book is also notable for giving us a deeper look at the inner ranks of the enemy. Whilst previous books have briefly featured the various Chaos warlords, their minions and their reactions to the Ghosts' activities, this is the first one where they have a reasonable amount of page-time, with particular attention focused on the nine assassins and their various battles with members of the Ghosts. Whilst a nice idea, it is a little bit undersold in this book. There's simply way too much going on to properly introduce nine badass assassins, give them all a decent level of description and background and then set them against the Ghosts in various engagements in the 250-odd page count. As such this storyline is unfortunately rushed.

More satisfying are the resolutions to long-standing storylines. The enemy within the Ghosts is finally flushed out, other characters reach their destinies and we have the biggest and most shocking death in the series to date. This book feels like the end of an era in the series, with the book's ending setting up an apparent new and bloodier phase of the war.

Sabbat Martyr (****) brings the 'Saint' arc to an enjoyable conclusion and ensures that things will never be the same again for Gaunt and his troops. The book is available now as part of The Saint omnibus in both the UK and USA.
Posted by Adam Whitehead at 17:37