DISCWORLD and DOCTOR WHO TV news

At the Discworld Convention, which just concluded in Birmingham, Sir Terry Pratchett confirmed that the next Discworld TV adaptation by Sky One would be Unseen Academicals, the most recent Discworld novel (at least until I Shall Wear Midnight is released on Friday). This follows the popular and successful adaptations of Going Postal, The Colour of Magic/The Light Fantastic and Hogfather. 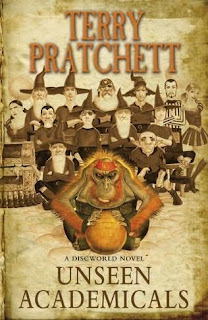 This news is slightly surprising. Given David Jason's role in getting the Discworld adaptations off the ground and the news that Going Postal was adapted because he wasn't available, the expectation was that Sourcery would be the next book up to be adapted, with Jason reprising his role as Rincewind, with Making Money (the sequel to Going Postal) coming up if Jason was unavailable. Going for Unseen Academicals seems to be a rather random choice, it has to be said. The new adaptation will air in 2012. 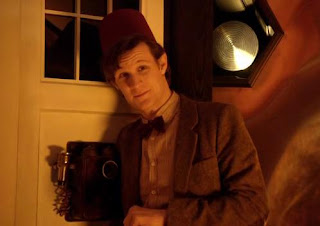 No word on if the fez will return next season.
Meanwhile, Season 32/6/2 of Doctor Who (delete according to preference) is going to be split into two half-seasons. The first seven episodes will air in the traditional pre-Easter slot in 2011 with the concluding six episodes following in the autumn. According to producer Steven Moffat, this is because the season will feature a huge mid-season cliffhanger which the BBC wants to capitalise on and to build up fresh enthusiasm for the autumn. Other commentators have more cynically suggested that the BBC want to move the show to a more beneficial autumn timeslot ratings-wise (although whether this affects Merlin, the BBC's autumnal Doctor Who stopgap, remains to be seen).

Before we get to the new season, there will be a Christmas special airing later this year.
Posted by Adam Whitehead at 22:15

I really thought that David Jason would reprise his role as Rincewind for 'Sourcery', my favourite Discworld book! Well, that's fine if he will settle for a cameo in 'Unseen Academicals'....

I'm a bit surprised at the Discworld news, too. I would have expected "Making Money" to be the next one above almost any other.
Well, no doubt I'll watch this one, too.