Dakota Merrick and Lucas Corso have recovered an alien spacecraft belonging to the enigmatic and long-extinct Magi. Possessing a functional FTL drive, the ship holds the key to freeing humanity from its dependency on the Shoal, hitherto believed to be the only race to possess the secret of superluminal travel. Unfortunately, Dakota and Luca are now 'guests' of the Bandati, another Shoal vassal species equally anxious to gain the secrets of the drive. As different factions of Bandati battle one another for access to the alien ship and the two humans who can pilot it, it becomes clear that the Shoal have been lying to their vassals for centuries about their abilities, for another race whose power rivals that of the Shoal are making their own play for the Magi vessel... 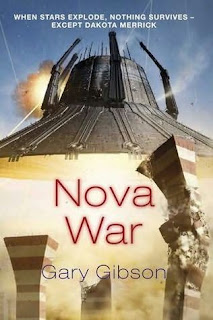 In the second volume of The Shoal Sequence, the ante is upped as various alien races and factions within those races (and within the human Consortium) attempt to seize control of the Magi ship, whilst Merrick and Corso, aware of the ship's ability to unleash devastation on a vast scale, struggle to stop it falling into the wrong hands. The result is a complex, many-sided struggle with our heroes caught in the middle, unsure of which faction to ally with.

Nova War is very much in the same vein as Stealing Light, with impressive action sequences bridging scenes featuring complex ethical dilemmas and some nicely-judged character-building moments, most notably as Dakota considers whether her unmatched ability to pilot the alien vessel could turn her into some kind of tyrant. The messy relationship between Dakota and Corso, who are on the same side but distrust one another's motives, is nicely developed and the story moves at a cracking pace, but some weaknesses remain. The new alien races, the airborne Bandati and the Emissaries of God (a race of psychotic space-elephants), are again not really that alien, whilst recurring bad guy Hugh Moss is starting to get a little annoying (although we finally learn why he is apparently indestructible). Dakota and Lucas again spend most of the book imprisoned in one form or another, which is frustrating, but made up for by the impressive (if rather rushed) climax.

Nova War (****) continues the Shoal Sequence trilogy in a readable and entertaining manner. It is available now in the UK and on import in the USA.
Posted by Adam Whitehead at 17:15