The Railway Man by Eric Lomax

In February 1942, the city of Singapore, defended by 80,000 British and Commonwealth troops, surrenders to the Japanese. The loss of Singapore, coupled with the preceding loss of the British warships Repulse and Prince of Wales, is described by Churchill as the darkest British moments of the Second World War, whilst the capitulation of Singapore becomes the British Army's greatest defeat. 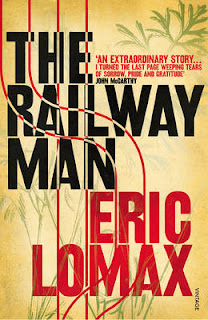 Amongst the tens of thousands of British soldiers rounded up and taken into captivity is Lt. Eric Lomax, a Royal Signals officer. Initially, the vast mass of British POWs hugely outnumbers their Japanese captors, leading to a relaxed atmosphere where the British prisoners mostly police themselves. Overconfident, many of the British prisoners began building home-made radios to keep a closer eye on the course of the war. However, as time passes the POWs begin to be dispersed, many being sent to be worked to death on the River Kwae railway as it slowly makes its way across Thailand and into Burma. In these smaller camps, much more aggressively policed by Japanese guards, the prisoners find their confidence and expectation of good treatment rapidly disabused. Lomax's involvement in the construction of clandestine radios leads him to being imprisoned, humiliated, tortured and condemned to a number of horrific prisons in and around Bangkok.

Eventually the war ends and Lomax returns home, but finds that his torture continues. His experiences lead to the breakdown of his first marriage, an estrangement from his father and decades of nightmares and broken sleep patterns. Only in the early 1990s does Lomax finally receive the counselling and psychiatric help he has needed, a process which eventually leads him back to Thailand and a meeting with one of his Japanese tormentors, an interpreter who rejected his nation's barbarous methods of torture and militarism and has spent the decades since working to ensure that the Japanese do not forget what they did in the war. In this meeting Lomax eventually finds a kind of peace, fifty years after the war ends.

The Railway Man is a memoir of one man's experiences in the Second World War. It opens with a summary of Lomax's childhood and background, his experiences as a railway and engineering enthusiast, his decision to enlist before WWII even starts and his eventual involvement in the debacle of Singapore's fall (the city's monstrous defences were oriented seaward, allowing the Japanese to simply walk in from the rear and take it almost completely unopposed). This is followed by the largest part of the book, as Lomax recalls his experiences in various POW camps and later prisons, in which he recounts his treatment at the hands of the Japanese. These sections are definitely not for those with weak stomachs. The cruelty of the Japanese to those who surrendered to them is well-documented, but even so the sheer, inhuman horror they inflicted on Lomax is shocking. However, even more startling is the lack of counselling or treatment Lomax received upon his eventual release, and the mild mistreatment inflicted on the former POWs by their liberators (such as former POWs, in many cases malnourished and weakened by four years of captivity, being expected to do the work of fully-healthy, fresh recruits on the return voyage to Britain).

The book ends with Lomax's experiences as a much older man, meeting one of his former tormentors face-to-face in Thailand, revisiting his old prison camp and then visiting Japan. This section of the book is the most powerful, as Lomax's utter hatred and loathing of the Japanese comes through the text vividly. He has no interest in forgiveness or reconciliation until he meets his former adversary and discovers the extreme lengths he has gone to to make amends for his actions in the war, including directly challenging Japan's culture of denial and disinterest in the war crimes committed by its soldiers during the war.

The Railway Man is one of the most powerful experiences of life in wartime I have ever read. Lomax illuminates the so-called 'forgotten war' by showing the rank foolishness that led to Singapore's capture, the overconfidence of the British POWs whose initial freedoms led them into a false sense of security, and the horrors of torture, in which no punches are pulled. Lomax describes his own mistreatment in a somewhat dispassionate tone for the most part, but occasionally his fury and anger at his mistreatment comes through, undimmed by fifty years of peace (the book was originally published in 1995). Lomax refuses to consider himself a hero, citing many of his fellow soldiers whose feats were more impressive (such as the Scottish officer who grabbed a rifle off a startled Japanese guard to put a bullet through one of his own men dying from cholera after the Japanese proved unable to shoot him accurately), but, as with many old soldiers, Lomax dismisses his own achievements too easily. Lomax refuses to give out any names or compromise the network that led to the construction of the radios, despite being put through treatments almost too horrendous to contemplate (including the Japanese practice of repeated waterboarding), saving the lives of his colleagues. The final section, dealing with the reconciliation, is quietly hopeful, with the reader left hoping that the author has indeed exorcised his demons through the process of the meeting and the writing of this book.

The Railway Man (*****) is a remarkable story, powerful, moving and intense, and again confirming that people can endure incredible hardships under extraordinary circumstances when the need is greatest. It is a book that everyone with an interest in the Second World War should read. It is available now in the UK and USA.
Posted by Adam Whitehead at 20:50

I think if you talk to many young Japanese people these days, many of them would have no idea about the true horrors that their countrymen subjected POWs to.

Wert, have you seen the Aussie TV series Changi? It's a brilliant series about POWs in Singapore notorious Changi prison. I've been to the priosn (which they've now moved) and admit to being brought to tears by some of the stories on the placards in the tiny little museum there.

I also just watched the movie a few days ago "The City of Life and Death" about the rape of Nanking, I actually think the filmmaker massively pulled his punches but it is a staggeringly powerful film about the atrocities that happened.

Anyway, in Australia many of the older generation still despise the Japanese - my own Nan was a nurse in the Pacific and in Japan after the war (I have seen a photo of her a couple other nurses sitting on the only grassy patch in a field of devastation in Nagasaki) and she despises the Japanese and nothing can be done to change her mind. Younger generations no longer keep that hatred going, which is natural and good, but I think people in all countries involved really should be educated about their Country's past transgressions so that mistakes are not made again.

Anyway, good review, I'll keep an eye out for it.

Oh I also wanted to mention the Sandakan death marches in Borneo. My parents recently visited the various shrines commemorating the event and they had no idea about it until they happened across them on a different tourist guided walk - they ended up telling the tour operators they should change or add to their tours to include the shrines.

I'd never heard of it either but now have and am amazed it is not more well known. Only 6 Australians survived out of 2400 Allied POWs and thousands of other civilians.

I watched a documentary on the Beeb some few years ago about Lomax meeting up with the Japanese guard you mention in the review who had been involved in the torture that he went through. It's probably on Youtube somewhere if you haven't seen it.

If you are looking for an excellent book on the campaigns in the Far East you should check out Feargal Keane's Road of Bones. It's about the Battle of Kohima, where 1500 British and Empire troops took on a Japanese army 15000 strong. Epic in every sense.

When the film Australia was released a couple of years ago, many younger Aussies had no idea Darwin was bombed by the Japanese during the war. I learned about it at school in the 60s, my brother who is 9 years younger, didn't. So much for getting an education. As they say, those who forget the past are doomed to repeat it.
In all my travels in Asia during the past 35 years, only the peace memorial at Hiroshima and the genocide museum at Tuol Sleng school in Cambodia moved me to tears.
Thanks for reviewing this books, even if it isn't fantasy. I shall seek it out. - Ian

Ian - and also that the Japanese managed to get into Sydney Harbour in mini one-man subs!

I have just finished reading this most harrowing book. I think it is brilliantly, and honestly told. The last few pages where Mr lomax meets his tormenter brought me to tears. The treatment handed out to him and all the other P.O.W.s is probably far beyond our comprehension but the pictures he painted stopped me from putting this book down.

I just heard word that Colin Firth will be starring in a film adaption of the book. I think it'd make for a powerful film (especially with Colin Firth leading the way - he's good with all that traumatized, emotional stuff). The book is rather graphic though, so I'm guessing the movie won't be for the weak in stomach. I wonder how they will be doing the age spread since it starts with him as a much younger man and ends with him as a much older man, neither age which Firth is at.