An American Werewolf in London is being remade.

Classic 1981 horror-comedy An American Werewolf in London is being developed as a remake. 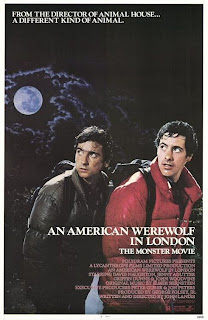 The LA Times article about the project is positive about the idea, pointing out the current craze for werewolves and other supernatural creatures should make this a hit and citing the popularity of the horror-comedy subgenre (although the fact they can't think of another successful entry in the field other than the six-year-old Shaun of the Dead is telling). A quick trawl of the Internet reveals that the reaction of most people to the news has been 'negative' to put it mildly.

Part of the problem is that the original American Werewolf achieved its success through its ground-breaking prosthetics and effects work, particularly the werewolf transformation sequence which remains disturbing and impressive thirty years on. For the new film you just know they're going to throw in some CGI and be done with it (although if they did adopt a strict no-CGI approach, I'd be more interested in it). With a witty and impressive script it might be worth a look, but given the quality of recent remakes I'm not holding my breath on this one.
Posted by Adam Whitehead at 13:51

Email ThisBlogThis!Share to TwitterShare to FacebookShare to Pinterest
Labels: an american werewolf in london, news

This is indeed sad news. The original was a wonderful movie - I can't imagine anything they might do that would be other than denigrating to the original. Leave it be - it was perfect as it was. How about trying something completely absurd, like creating something new, perhaps? What's wrong - isn't there anyone out there with enough imagination or ambition to actually make a new movie (even if it's along the same story line)?

Where will they find a comparable leading lady?

Can't producers come up with anything new? Remake after remake or old ideas with a shiny new label. Take a chance and create some new classics for once.

"pointing out the current craze for werewolves and other supernatural creatures"

...yawn, again they show how clueless they are. What's the joke I read recently about the movie exec trying to anticipate the next trendy monster and coming up with something ridiculous like Minotaurs in high school or something?

Well, this isn't about Werewolf, but I don't know where else to post. Why haven't you put Richard Morgan's excerpt from The Cold Commands on your blog? It's up at his website.

Damnit, Hollywood! Damn your commitment to raping all good things in the name of money! And damn you sheepish public for blithely consuming such drivel!

*voice of Charlton Heston in Planet of the Apes* Damn you! Damn you all to hell!

But seriously, I can sum it up in four words: This is gonna suck.