1939. In the closing weeks of the Spanish Civil War, British intelligence agent Raybould Marsh is dispatched to meet an informant who claims to have vital information about some of Nazi Germany's top-secret weapons being field-tested in the conflict. The informant explodes in front of Marsh with no apparent cause. As the clock ticks down to war between Britain and Germany, it is discovered that Germany has developed technology that can turn certain, gifted individuals into super-beings, people who can turn invisible, manipulate fire or even predict the future. 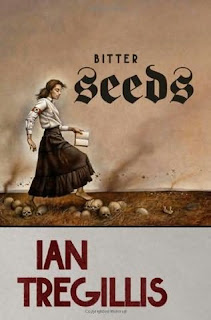 Britain's fortunes in the war turn sour as the Germans seem to be constantly one step ahead of them, destroying the transports carrying out the evacuation of Dunkirk and striking down the radar towers that will be needed to protect the country from Luftwaffe bombing. But Britain is not completely unprotected, and the newly-formed Milkweed organisation has resources to call upon which dwarf even the powers of the German ubermensch. But these powers are not to be summoned lightly...

Bitter Seeds is Ian Tregillis' debut novel and is a brash, refreshing alt-history which sees Nazi superhumans and British warlocks battling to the death during WWII. It's a cool premise, generally well-handled with a large and complex story being effectively told through a small number of POV characters on both sides. However, if the story sounds too big to be contained within a single volume, you would be right. In an increasingly annoying trend in modern SFF publishing, Bitter Seeds is the first novel in a trilogy (dubbed The Milkweed Triptych) despite this fact not being mentioned anywhere on the cover or inside the book. The story doesn't come to an end or really any kind of conclusion, just screeches to a halt 350 pages in with a number of stories broken off mid-flow. The follow-up volumes will be entitled The Coldest War and Necessary Evil.

That out the way, Bitter Seeds works successfully on a number of levels. Characters are drawn pretty well, with British secret agent Raybould Marsh being an effective central character, driven by passion and rage, whilst his amateur magician friend, Will Beauclerk, makes a good foil for him. Will's story assumes greater importance as the novel proceeds, culminating in some shocking moments near the end of the book that hint that his role in the sequels will be very interesting indeed. The opposing characters, such as Klaus and his River Tam-like sister Gretel, are also intriguing characters, although the way Tregillis handles Gretel's potentially tension-destroying prescience (by making her a whimsical fruitcake who sometimes lets the Nazis lose battles due to the callings of A Higher Plan) seems to be dramatically unsatisfying, with Gretel working as a constant deus ex machina-in-residence, who may or may not defeat our heroes' plans at the whim of the author.

Elsewhere, Tregillis has done his homework, with WWII Britain described in convincing detail and atmosphere, even if the book's (relatively) slim page count means that some elements need to be skipped or drawn only in broad strokes. His alteration of history is well-conceived but is a little inconsistent: at first it appears that the Nazi superhumans will be providing explanations for real oddities in the war (like the ease with which the German armoured columns passed through the supposedly impenetrable Ardennes Forest), but later the outcome and course of the war shifts very dramatically away from the historical, and in fact becomes credence-stretching by the time we get to the end of the novel. This is fair in that it reflects the tone and plot of the novel, as supernatural forces become increasingly prevalent in their impact on the world, but those who prefer their alt-history to be more closely tied to real events may be underwhelmed as the book deviates radically from established history by the end.

Tregillis has a nice way with words, particularly in descriptive prose, but this is inconsistent. Nice, flowing prose is replaced by a more prosaic, infodump-heavy mode with little forewarning, increasingly favouring the latter as the novel progresses. This is disappointing as Tregellis' writing is what lifts the book above more plot-driven WWII alt-histories by the likes of Harry Turtledove and John Birmingham, but as the book continues to unfold his prose becomes more ordinary and less engaging.

All of that said, the book is short, fast-paced and, for all its faults, remains something of a page-turner. It is the finely-judged character interrelationships, particularly the increasingly tense friendship between Raybould and Will and the fraught sibling relationship of Klaus and Gretel, which defines the novel and leaves the reader eager to read on into the next novel.

Bitter Seeds (***½) fails to live up to its full potential, but remains an effective and readable debut novel. It is available now in the USA and on import in the UK.
Posted by Adam Whitehead at 18:31