Empire of Light by Gary Gibson

The Shoal Hegemony and the Emissaries of God are locked in a devastating nova war between the Perseus and Orion arms of the Galaxy. Hundreds of star systems have been destroyed, billions slain. The war is starting to move in the direction of human space, but the Consortium is riven by in-fighting as the Consortium's rulers vie with the Peacekeeper Corps established by Dakota Merrick and Lucas Corso for control of the FTL-equipped ancient alien spacecraft. Merrick has uncovered a possible way of stopping the war for good, but it means forging an alliance with her greatest enemy and embarking on a lengthy trip into the very heart of the warzone. 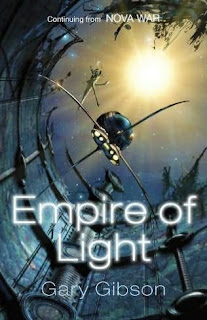 Empire of Light brings the three-volume Shoal Sequence to a conclusion, although further books in the same setting are promised. Merrick and Lucas achieve their destinies, new characters are introduced and others are finally killed off as events reach a head. As a conclusion, the book works, but is not altogether satisfying.

It is an odd, unexpectedly quiet book, however. Given the vast, epic events set in motion by the previous volumes, it is surprising that most of the book is taken up with a single journey on a single, human-built spacecraft across the Galaxy, contending with internal factionalism and murder mysteries rather than the vast space battles and politicking of the previous books. As a result the book feels mechanical and anti-climatic: our heroes have to deliver a plot device to a certain location and it pretty much takes care of everything for them, at least until the epilogue (set centuries later, almost always a bad idea) informs us that lots more stuff is still to come and a bunch of interesting-sounding events have been skipped over (shades of Alastair Reynolds' troubled ending to Absolution Gap). As a result, although the immediate threat is addressed, many of the other narrative and character arcs are given short shrift.

Gibson's prose remains readable and entertaining and the book still has a page-turning quality to it, but there is definitely the feeling that this book didn't quite live up to expectations. Particularly notable is the fact that the cast is suddenly widened in this last book away from the tight focus on Dakota and Lucas in previous volumes, with the newcomers (particularly Ty Whitecloud) being intriguing and well-drawn characters, but given the limitations of space they are not as developed as much as one might hope. In addition, the oft-mentioned temptations to the dark side that Dakota's immense power has opened up for her don't particularly lead anywhere interesting, which feels like a wasted opportunity.

Empire of Light (***) is an entertaining book, but doesn't fulfil the ambitions laid out earlier in the series. Gibson has immense potential, however, and I look forward to his next project with interest. The book is available now in the UK and on import in the USA.
Posted by Adam Whitehead at 12:18