Gaunt's Ghosts: The Armour of Contempt by Dan Abnett

The Crusade armies have identified their next target: the Chaos-held world of Gereon. Ibram Gaunt and a dozen of his best troops spent a year and a half on Gereon fighting the archenemy, and the Ghosts are in the vanguard of the liberation effort. Unfortunately, as the battle for Gereon rages on an apocalyptic scale, Gaunt gradually learns there are extenuating reasons for this invasion, reasons that are related to his prior mission to the planet... 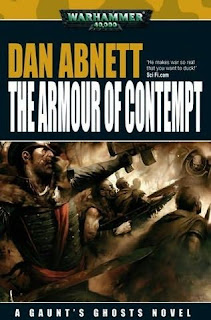 The Armour of Contempt is the tenth Gaunt's Ghosts novel (of the twelve currently available) and the third book in the 'Lost' arc. The novel initially appears to have been written as a fan-pleasing move: having been through hell and back during the previous small-scale, stealth mission to Gereon, Gaunt gets to return with several hundred thousand troops of the Imperial Guard, vast numbers of tanks and aircraft and several Titans (skyscraper-sized battlemechs with enough firepower to level a city with a single salvo) to dish out some much-needed retribution to the occupiers. Of course, that would be far too obvious and much too boring to make for an interesting book. Instead, the novel is divided into two mostly-separate narratives which have different objectives.

In the first, Dalin Criid undergoes Imperial Guard training. Rescued from Vervunhive as a ten-year-old back in the third novel, Necropolis, Dalin is now eighteen and spoiling to join the ranks of the Ghosts. Unfortunately, as a trainee he is serving as part of the military reserve and when the assault on Gereon begins, he finds his reserve status activated and himself fighting as part of an ad-hoc-assembled military unit stuffed full of rookies, rather than with the Ghosts. This gives Abnett a chance to show us what it's like as part of a full-scale, combined-arms offensive in the WH40K universe rather than the standard Gaunt's Ghosts narrative about smaller-scaled conflicts with stealth and infiltration elements, as well as a chance to dish out more information and background on Guard training. This narrative unfolds fairly concisely with a focus on how Dalin handles the ridiculous pressures put on his shoulders and those of his unit. It's entertaining, but perhaps a little too straightforward after some of the more intriguing curve-balls thrown our way in the last few novels.

In the second narrative, Gaunt has to reacquaint himself with the Gereon resistance and the troops he left behind last time around. This storyline is more of a gut-punch, as Gaunt discovers just how badly he's been used by both his supposed friends and by his enemies, with the people of Gereon left to pay the price. This is a pretty grim story which doesn't have much of a happy ending, especially as it emphasises Gaunt's flaws (an Imperial commissar really should have seen the ending coming) instead of his virtues, something that is always welcome as it would be extremely easy for Abnett to allow Gaunt to become a flawless hero.

The two narratives unfold reasonably well together, although the linking device is a little bit corny. This book features the death of another prominent Ghost, but it is foreshadowed so much that it lacks any kind of real impact, which is a shame given the story points Abnett had set up in previous novels to support it.
Despite this minor weakness, The Armour of Contempt (****) is another strong entry in the series, with an different (but effective) structure to the rest of the novels. The book is available now in the UK and USA as part of The Lost omnibus.
Posted by Adam Whitehead at 16:59